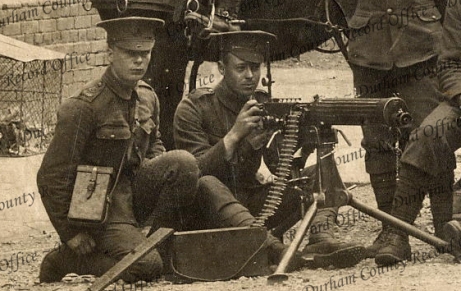 Red Bugle identification badge worn on the back of the collar by the 10th Battalion. Image courtesy of Anderson and Garland, Newcastle.

By the end of the war in November 1918, the DLI had grown to 43 battalions, as new Reserve, Service, Territorial, Young Soldier, and other battalions were formed. Of these 43 battalions, 22 served in war zones from the Western Front to the North West Frontier of India.
——————–
In August 1914, within days of Britain declaring war on Germany, Lord Kitchener, the newly appointed Secretary of State for War, called for volunteers to join a New Army. Across County Durham and the North East men rushed to enlist.

On 22 August 1914, the first 500 recruits left the DLI’s Depot in Newcastle for Woking in Surrey, where they were formed into the 10th (Service) Battalion DLI – the first of the DLI’s Service battalions. Living in tents, initially without khaki uniforms or modern rifles, the new battalion began to train for war. The battalion was lucky, however, in its commanding officer, Lieutenant Colonel Hubert Morant, a Regular officer who had recently commanded the Depot. Other officers joining the battalion were also experienced soldiers, and the Regimental Sergeant Major, Arthur Noble, had fought in the Boer War with distinction with the 1st Battalion DLI.

In February 1915, the 10th Battalion moved to barracks in Aldershot for final training. On 21 May, 10 DLI, as part of the 43rd Brigade of the 14th (Light) Division, sailed for France. Three weeks later, the battalion was in the front line south of Ypres, where it suffered its first casualties, before being moved into the Ypres Salient itself. There, at the end of July 1915, the battalion successfully defended smashed trenches south of Hooge still filled with the dead from the previous day. In this fighting, 10 DLI lost over 170 men killed or wounded.

In June 1916, 10 DLI moved south to Arras and then in early August to the Somme, where it joined the fighting to clear Deville Wood. Two weeks later, on 16 September, the battalion attacked Gird trenches and, caught by German machine gun fire, was unable to advance, losing some 400 men killed, wounded, or missing.

On 9 April 1917, 10 DLI was in action on the opening day of the Battle of Arras, successfully crossing the Hindenburg Line system of barbed wire and trenches, taking prisoners, and advancing over a mile. This was the battalion’s finest achievement of the war.

The 10th Battalion was back in the Salient in August 1917 for the Third Battle of Ypres, suffering heavy casualties in fighting on the Menin Road at Inverness Copse, before taking over the front line at Passchendaele in December. In early 1918, faced with a shortage of replacements, the British Army in France was reorganised. Some battalions were disbanded, whilst others were moved to new brigades and divisions. Not having had any replacements since the Menin Road fighting, Colonel Morant’s battalion – the first DLI Service battalion – was disbanded with the remaining soldiers sent to other battalions.

Page 251 of Colonel Morant’s memoir records that on 3 February 1918 the battalion was split into six parties and transferred to the 2nd, 5th, 6th, 7th, 8th and 15th Battalions. The band went complete to the 2nd Battalion, and also a good percentage of the best men.