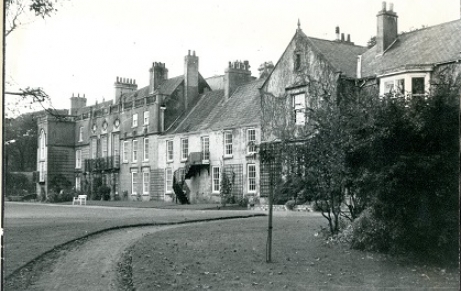 In 1914 Whitburn Hall was the principle building in the small village of Whitburn, on the Durham coast between the industrial towns of South Shields and Sunderland. The Hall and village were comparatively isolated: a lane ran south from the village across sand dunes to Sea Lane, where a tram could be caught for Sunderland. The nearest railway station was an hour’s walk away at East Boldon.

Whitburn Hall was owned by the Williamson family, who had lived there since 1780. They owned large tracts of land north of the River Wear in Fulwell, Monkwearmouth, Monkwearmouth Shore and Whitburn. Much of their wealth came from their vast limestone quarries at Fulwell, Southwick and Carley Hill. By 1900 the Hedworth Williamson Lime Company was producing 145,000 tons of limestone a year and selling 50,000 tons of lime.

The hall was a long rambling building which had been extended by successive heads of the family. A large drawing room and entrance hall was added in 1856 and a new centre wing in 1881. There were about 40 rooms on three floors, plus servants’ dormitories. A laundry was next to the main house, along with stables, a coach house and other detached buildings. It was set in eleven acres of ornamental gardens – which included the village cricket pitch – and there were fine sea views to the south. The grounds were enclosed three sides by a high wall. As such, the Hall was easily adopted to the military’s needs, and we know that it was used as a recruitment and basic training depot for two units in 1915 and 1916.

Four days after war was declared in August 1914, Sir Hedworth Williamson placed Whitburn Hall and Appley Hall, the family’s house near Ryde on the Isle of White, at the disposal of the Military. In practice this was not as generous as it sounds, because Whitburn Hall was empty; the family had moved out in the autumn of 1913, preferring to live at the recently purchased, more modern, Appley Hall. Whitburn Hall was to be let on a repairing lease. The family continued to live at Appley throughout the war, where the grounds were used by Sea Scouts for summer camps and, in 1917, the Duke of Connaught inspected a local company of volunteers.

In February 1915 Whitburn Hall was used as a recruitment and basic training depot for the Northumbrian Divisional Cycle Corps, when 200 volunteers were needed for service in France. The quarters provided in Whitburn Hall were described as ‘exceedingly comfortable’ with the cricket ground being used as a parade ground. The men of the Cycle Corps were to be used as battalion runners, dispatchers and scouts. It was anticipated that they would also form a modern mobile force, which needed fewer resources than the cavalry, and could cover up to fifty miles a day on good roads. It is not clear what training the men received at Whitburn but in the rush to mobilise in the winter of 1914-15 it may not have been as thorough as that given elsewhere -see http://www.durhamatwar.org.uk/story/14270/

In mid-April 1916 an anti-aircraft artillery unit of forty men was advertised as forming at the Hall in Whitburn. The unit was probably formed in response to the recent Zeppelin attack on Sunderland. Recruits were needed to be fit for garrison service at home and assurances were given that men who enlisted would be employed at home with anti-aircraft guns and would probably not leave the district. Any drafts that were to be sent away would be sent from a permanent Royal Garrison Artillery unit. Sadly, no evidence seems to have survived to show how this unit contributed to the defence of the Durham coast.

It is probable that the military continued to use Whitburn Hall until the end of the war but the narrative thread in local newspapers runs out in the spring of 1916.