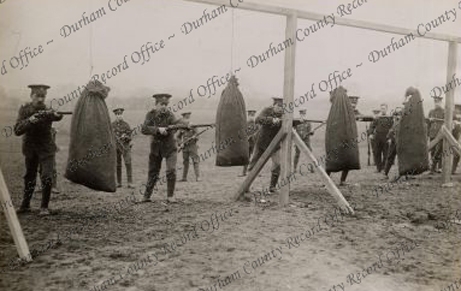 By the end of the war in November 1918, the DLI had grown to 43 battalions, as new Reserve, Service, Territorial, Young Soldier, and other battalions were formed. Of these 43 battalions, 22 served in war zones from the Western Front to the North West Frontier of India.
——————–
In August 1914, within days of Britain declaring war on Germany and Lord Kitchener’s call for volunteers to join a New Army, thousands of men rushed to enlist. In Liverpool, workmates and friends were encouraged to join the same unit; so the idea of battalions of ‘Pals’ was born and rapidly spread across the country.

In early September, a committee was formed in County Durham, headed by the Earl of Durham, to raise and equip a County battalion as part of the Durham Light Infantry. Over £10,000 was quickly raised and permission given by the War Office to begin recruiting a County battalion that was formally numbered as the 18th Battalion DLI, but more popularly known as the Durham Pals.

The Durham Pals, however, had no home until Lord Durham loaned the battalion his house and land at Cocken Hall, north east of Durham City. There the first recruits from across the County arrived in late September. Soon a new hutted camp was built in the fields near the old house, new khaki uniforms arrived, and over 1,000 men began their long months of training.

In November 1914, fear of German naval raids on the North Sea coast, saw about 500 Pals, though still only partially trained, sent from Cocken to Hartlepool to man the defences. There, early on 16 December, German battle-cruisers shelled the town. Amongst the casualties were 5 Durham Pals killed and 11 wounded. These were the first casualties caused by enemy action suffered by Kitchener’s New Army.

At 7.30am on 1 July 1916, the 31st Division attacked the German trenches at Serre, at the northern end of the Somme battlefield. Most of the Durham Pals were in reserve behind the front line, but ‘D’ Company, about 150 men strong, joined the initial advance. Before the attack began, however, the Germans bombarded the British front line. Many men from ‘D’ Company were killed or wounded before they could climb out of their trench.

By 8am, the 31st Division had suffered 2,000 casualties. The remaining Durham Pals were then ordered forward into the shattered British front line to repel any counter attack. And they remained in the front line under constant shell-fire until 5 July. By then, the battalion that had gone into the trenches on 30 June almost 800 strong, had suffered almost 500 casualties, including 70 dead.

After the Battle of the Somme, 18 DLI was rebuilt and continued to serve on the Western Front until November 1918, but it was never the same again. Too many of the original Durham Pals had been killed or wounded on the Somme.

In May 1919, after many men had already been demobilised or transferred to other units, the remainder of 18 DLI returned home, arriving in Durham on 27 May. There the battalion’s King’s colour was laid up in Durham Cathedral. The next day, the Durham Pals were disbanded.