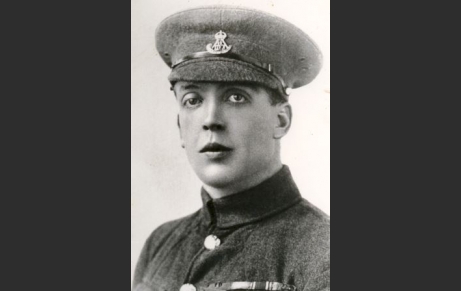 Thomas Young was born Thomas Murrell (or Morrell) in January 1895 at Boldon Colliery, County Durham. After his father was killed in a pit accident, his mother remarried and the Young family eventually settled in High Spen, a colliery village west of Gateshead.

In 1914, Thomas Young, who had been working as a hewer, enlisted in the 9th Battalion DLI – a Territorial battalion with its headquarters at Burt Terrace in Gateshead – and went with his battalion to France in April 1915. He served as a stretcher bearer on the Western Front and was twice wounded before he gained the Victoria Cross for his bravery between 25 and 31 March 1918 at Bucquoy in France.

Victoria Cross Citation for 203590 Private Thomas Young, 9th Battalion DLI, London Gazette, 4 June 1918: “For most conspicuous bravery in face of the enemy when acting as a stretcher bearer. He showed throughout the whole course of the operations a most magnificent example of courage and devotion to duty. On nine different occasions he went out in front of our line in broad daylight under heavy rifle, machine-gun and shell fire which was directed on him, and brought back wounded to safety, those too badly wounded to be moved before dressing he dressed under this harassing fire and carried them unaided to our lines and safety; he rescued and saved nine lives in this manner. His untiring energy, coupled with an absolute disregard of personal danger, and the great skill he showed in dealing with casualties is beyond praise. For five days Pte. Young worked unceasingly, evacuating wounded from seemingly impossible places.”

Private Young was presented with his Victoria Cross by King George V at Buckingham Palace on 29 June 1918.

In 1939, Thomas Young, along with many other Great War veterans, joined the newly formed 13th (Home Defence) Battalion DLI. In 1942, he transferred to the 1st (Blaydon) Battalion Durham Home Guard and Sergeant Young served with this unit until the Home Guard was stood down in December 1945.

After the First World War, Thomas Young had returned to his work underground at High Spen colliery, and he continued to work as a miner, finally as pithead baths’ attendant, until ill-health forced him to retire.

Thomas Young, who was an enthusiastic member of the Victoria Cross and George Cross Association, died at Whickham aged 71 in October 1966, and was buried at St. Patrick’s Church, High Spen.

His medals are in the DLI Collection. https://www.dur.ac.uk/library/asc/dlimedals/


Medal(s): Victoria Cross, 1914-15 Star, British War Medal, Victory Medal. Thomas Young would also have been eligible for the Defence Medal for his service with the Home Guard.

The Gateshead Gurkhas. A History of the 9th Battalion The Durham Light Infantry, 1859-1967