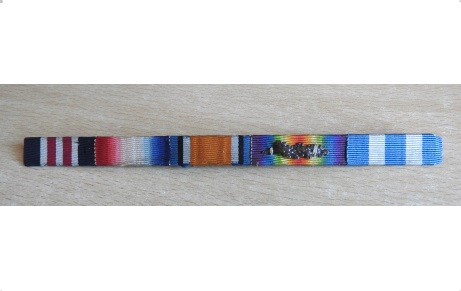 Medal ribbons, with thanks to the family

Medal ribbons, with thanks to the family

Citation for Military Medal, with thanks to the family

Certificate of mention in despatches, with thanks to the family

William Woodhead was born Barnsley, in 1895, to Richard and Lydia Woodhead. Although born a Yorkshireman, joined the 12th (S) Battalion DLI on the 10th September 1914, and served until he was discharged on the 16th January 1919 aged 23 years old.

On the 26 August 1915 the 12th Battalion landed at Boulogne and the following year, on 23 August 1916 he was awarded the Military Medal. The citation reads:

“I have carefully considered the reports on the work of [this] battalion in the recent attacks and I desire to congratulate the 12th Durham LI on their fine efforts.

When on the first day that the Brigade attacked, our right and centre was held up by machine gun fire and there was a big gap of 500 yards between our left and the Wilts. Your battalion very properly went right on the object and dug in. You thus occupied [as] much of the next Division’s objective as was allotted to our Brigade.

Under the circumstances I have no doubt that you acted wisely and that your action paved the way for further progress.

At night you seized the redoubt at 81 which completed our flank defence and dominated the valley. Called on again after a little rest, the 12th DLI made their flank left attack on Bailiff Wood and point 25 the former you occupied, and after hard fighting in which ‘D’ Company under Captain Pease greatly distinguished itself, you won 350 yards of trench, consolidating the same.

I have no doubt that this brilliant little action well lead and gallantly carried out contributed very much to the success of the 68th Brigade against Contalmaison, and that Brigade it must be remembered attacked from ground which we had won for them, thus making their flank attack and success possible after four previous attacks on Contalmaison had failed.

The 12th DLI have every reason to be proud of themselves. I desire my special thanks to be conveyed to officers, NCOs, and men.

In November of 1917 the 12th Battalion moved from France to Italy. It was in Italy during 1918 that William, then a warrant officer was mentioned in dispatches by General F.R. Earl of Cavan, dated 26 October 1918. Action at the River Piave on the 27 October 1918, also saw him received the Croce di Guerra, the Italian War Merit Cross. Although most painfully injured he re-joined his company and remained until the objective was taken.

William was discharged medically on the 16 January 1919 after serving four years and 129 days. According to the family, Woodhead was shot in the groin and buttocks,

He went back to Yorkshire and lived in Castleford, marrying Sarah North on the 4 December 1920 at the Memorial Church, Whitwood Mere in Castleford. They had four children, including Ernest, Frank, and Alan (1939 register) and William worked as a plasterer. He passed away in the later part of 1971 in Wakefield, Yorkshire.