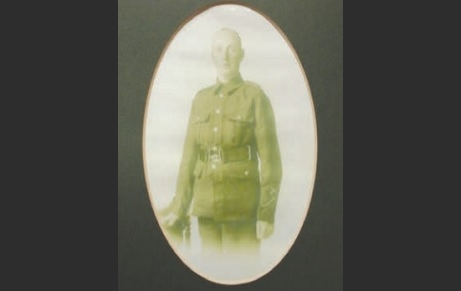 Photograph of Joseph Kelly in uniform with many thanks to ikb003

Joseph Kelly was born in Wigan in 1880 to Joseph and Annie, both of whom were born in Ireland. On the 1901 census he was living with his parents and younger brother, Martin James Kelly. Joseph junior was listed as a coal hewer, although family sources suggest that he was involved with jewellery-making.

Joseph moved to County Durham sometime before 1909, when he married Ellen Leyland. Ellen has also been born in Wigan and had moved to Northumberland after the death of her father. It seems likely that Joseph followed north to be with her. By the 1911 census Joseph and Ellen were living at 19 Renforth Street, Dunston, and had had a son, also named Joseph. Margaret, Ellen’s mother, was also living with the couple. Joseph’s army service record shows that Ellen had four other children by 1918: James, Theresa, Gerard and Margaret.

Joseph joined the Durham Light Infantry on 5 April 1915 and was posted to the 3rd/9th Battalion which had just been created out of the 2nd/9th Battalion. The 3rd/9th was a home battalion which was engaged in coastal defence and the training of officers and men in preparation for front line action. Joseph’s record shows that he was: “Attached to duty with Sir W G Armstrong-Whitworth and Co, Elwsick Works”. It seems, therefore, that he was working in munitions from 22 March 1916. His army service record mentions that he was a brass smelter, a skilled job that would have been very useful in a munitions factory.

Although his service record isn’t very clear it seems that he was recalled to the army in March 1918 and posted to the 5th (Reserve) DLI (3rd/9th DLI had been amalgamated into this battalion in August 1916). In September 1918 he was transferred to 15th DLI and posted to France, where he was killed less than a month after.