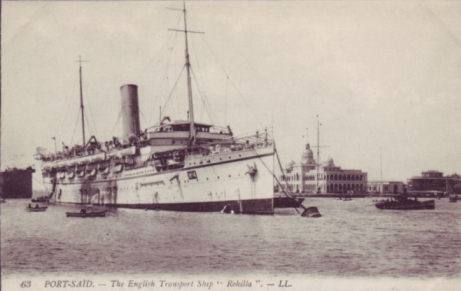 The Capture of the Steam Trawler Loch Ryan

On 28 September 1916 the Hartlepool trawler Loch Ryan was captured off the River Tyne by the German submarine U-64. Her Skipper, Richard Henry Whittleton, was taken onboard the submarine and an armed boarding party took over the Loch Ryan. By this stage in the war both sides knew what to expect – the trawler’s crew would be ordered into the small boat and the boarding party would set a time bomb which would sink the trawler.

On this occasion the U-Boat’s commander, Robert Moraht, a successful naval officer, took the unusual decision to take the Loch Ryan as a prize and sail her to Germany. Of the hundreds of non-combatant British fishing boats captured between 1914-1918 only three are known to have been taken as prizes. We don’t know why he did this, but the most likely explanation is that the Loch Ryan, which had been at sea for a week, had a full fish room. As she was a large modern trawler, she could store over ten tons of fish packed in ice.

On the night of 29 September, the Loch Ryan was spotted aground off the Dutch coast with her crew standing aft under guard. Later the Loch Ryan got free and sailed out of Dutch waters. Her crew of nine were subsequently made prisoners and sent to Dulmen Prisoner of War Camp. On 11 October, three weeks after the Loch Ryan had left Hartlepool, the local newspaper reported news of her stranding off the Dutch coast and, by the following week, postcards sent by two of the crew had been received by their families confirming that the crew were all prisoners of war and doing well. The Loch Ryan was used, without being renamed, by the German navy as an auxiliary before being sunk by a mine in the North Sea in February 1917.

The Loch Ryan had been built in Aberdeen for W. R Wetherly, an English trawlerman who became one of the city’s most successful trawler skippers. Launched in 1901, the Loch Ryan got its name because Wetherly’s wife came from Loch Ryan, in Dumfries and Galloway. He would later establish the Wetherly Steam Fishing Company Limited and each of the new company’s small fleet of trawlers was named after a family member. He sold the Loch Ryan to James Graham and Sons of Hartlepool in 1905-6.

The Graham family were Hartlepool’s leading trawler owners and stood at the centre of a complex series of trawler owning partnerships, which included family members and other Hartlepool businessmen such as Thomas Henry Peverell. Peverell, trading as Gray Peverell & Co. Ltd, owned the town’s only department store. The Loch Ryan was a good buy for the Grahams as she was built to the latest specifications and was one of Aberdeen’s most successful trawlers.

As the half yearly Board of Trade Running Agreement for Loch Ryan’s last fishing trip has not survived, very little is known about the men who were captured in 1916. A large trawler, the Loch Ryan had a crew of nine and more than half of the crew were probably from Scarborough, as Skipper Whittleton – who belonged to a Scarborough fishing family – preferred to employ fishermen from Scarborough or other North Yorkshire ports such as Staithes or Whitby. Walter Kershaw, possibly third hand, aged 32, was born in Scarborough and he was probably living at 10 Quay Street, Scarborough, with his wife Maria and three-year-old son Alfred, when the Loch Ryan was captured. He had been working on trawlers for at least five or six years. Isaac Reece was a Hartlepool man and he and his wife, Mary Jane, had a young family and were living in Moor Street, Hartlepool, in 1916.

We know more about Richard Henry Whittleton, the Loch Ryan’s Skipper. Born in Scarborough in 1880, he married a local woman, Agnes Jackson, in 1903 and later moved to Hartlepool to work in the town’s growing trawler fleet. By 1909 he was Mate of the Graham family trawler Loch Katrine, and then Skipper of the same from 1911 until 1913.

On the night of 31 October 1914 Whittleton had steamed the trawler Mayfly, in a howling gale, from Hartlepool to Whitby to help in the rescue of the crew and medical staff of the Hospital Ship Rohilla, which had run aground the previous day. The Rohilla was stranded on Saltwick Nab, a reef within sight of Whitby. Despite being only 400 yards offshore, the treacherous conditions made it impossible for the four rowing lifeboats deployed to get alongside the stricken ship. The plight of the doomed Rohilla was reported in the local papers as if it was an Old Testament tragedy – the long drawn out agony of the crew bravely waiting their inevitable end, hoping for mercy at the last. Whittleton towed one of the lifeboats to within half a mile of the Rohilla but it was unable to get close to her. As darkness fell the Mayfly steamed back to Hartlepool and set off again the following morning, only to find that the remaining fifty survivors had been rescued by the Tynemouth motor lifeboat. Whittletons effort was part of a huge uncoordinated rescue operation lasting three days and resulting in 146 of the 229 men and women onboard being were saved. Richard Whittleton later received £5 in recognition of his services and his crew members received smaller sums.

In June 1915 Whittleton and the Mayfly had rescued the crew of the Grimsby trawler Velocity. The crew had taken to the Velocity’s small boat before a U-Boat sank her with gunfire. Two days later, Whittleton was keeping a look out for submarines, from the roof of the Mayfly’s wheelhouse, when he saw the Velocity’s small boat. When the Mayfly came alongside it was obvious that the occupants were suffering from hunger and exposure, as the Germans had not allowed them to take their oilskins or any food with them. The Mayfly made all speed and the Velocity’s crew were landed safely at Hartlepool early the following morning.

The war cast a long shadow which could outweigh the blessings of peace and, on returning home to Scarborough in December 1918, one of the Lock Ryan’s crew, Walter Kershaw, discovered that his wife and son had died of influenza. Five years later in October 1923, Richard Whittleton was killed on board the Hartlepool trawler Gertrude Cappleman when the firing mechanism from a naval mine exploded. Over 190,000 mines were laid in the North Sea by both sides during the war and, although attempts were made to sweep the mines in 1918 and 1919, over 34,000 were unaccounted for – a dangerous legacy which would plague the fishing industry for years. The Gertrude Cappleman caught a mine in her net and it was hauled on deck. Thinking that the mine had been defused, Whittleton removed the brass firing mechanism and took it below, as he planned to keep it ‘for a keepsake’. Brass ornaments were fashionable then because they reflected light in dimly lit rooms and could be sold for small sums in hard times. The mine was put over the side before the Gertrude Cappleman returned to Hartlepool. Back in port, Whittleton was showing the mechanism to James Roberts, a fitter employed by Grahams, in the trawler’s cabin when it exploded killing both men. Whittleton’s son George H Whittleton, the ship’s cook and aged 17, identified his father’s body.

The loss of the Steam Trawler Doris Burton

My Grandfather John Harrison Green was the Chief Engineer onboard of Loch Ryan at the time of the vessels capture, I have a photograph of him whilst as a POW where he is standing with two unnamed persons. I enjoyed reading this article as I have been researching my grandfather, Thank you

As a grand-daughter of R.H. Whittleton I commend the writer/s of this article for their thorough research and adherence to the facts. A vital skill for historical accuracy.
Many thanks.