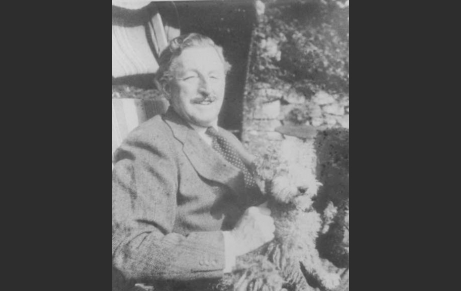 Thomas Andrews Bradford – one of the ‘Fighting Bradfords’ of Witton Park and the only one to survive the First World War – was born at Carrwood House, Witton Park, Bishop Auckland in 1886, the eldest son of George and Amy Bradford.

Thomas, with his three brothers and one sister, lived with his parents in Witton Park until 1894, when the family moved to Darlington. After attending Queen Elizabeth’s Grammar School in Darlington, Thomas was sent with his brother, George, as boarders to Eltham Naval College in Kent. Thomas, however, did not settle for a life in the Royal Navy and, after leaving school, trained as a land agent. Thomas also joined the 4th Volunteer Battalion The Durham Light Infantry (DLI) with its headquarters in Gilesgate, Durham City, and was commissioned in 1906 as a second lieutenant. In 1908, this Volunteer battalion became the 8th (Territorial Force) Battalion DLI. By 1910, Captain Thomas Bradford was commanding 8 DLI’s ‘D’ Company. As well as his military interests, Thomas was a great sportsman and played both rugby and cricket for County Durham before 1914.

In August 1914, when war broke out, Captain Bradford was at summer camp in North Wales. The battalion was then mobilised for home defence duties in the Sunderland area. On 18 April 1915, 8 DLI left for France and a week later was fighting in the Second Battle of Ypres. There Captain Bradford’s company was relieving Canadian troops that had suffered a poison gas attack, when it came under heavy attack from the Germans and by the end of the month, Bradford’s company of 200 officers and men had been reduced to just 20. Thomas himself was wounded and was twice mentioned in dispatches.

In January 1916, Thomas Bradford was awarded the Distinguished Service Order and promoted, firstly to Staff Captain and then to Brigade Major. In the summer of 1916, while on leave, he married Honore Rebe Blackett, the only daughter of Colonel William Blackett, a pre-war commanding officer of 8 DLI. Major Bradford remained on the Western Front for another year but in 1917 was given a permanent commission, transferred to the Yorkshire & Lancashire Regiment, and sent to Fermoy in Ireland, as an instructor with a Young Officers Training Battalion.

Thomas Bradford resigned his commission in April 1919. In 1920, he and Rebe had a son, who they named George James Roland Bradford in honour of the three dead brothers. After leaving the army, Thomas took up farming in Northumberland. Later he lived in Aden Cottage just outside Durham City. He was also a director of a colliery near Sacriston.

In his spare time, Thomas devoted his life to public service, for which he received a Knighthood in 1939. He was appointed Honorary Colonel of the DLI; Deputy Lieutenant of the County; received an Honorary Doctorate from Durham University where he was Honorary Treasurer; and was High Sheriff of Durham in 1942. Thomas was also chairman of the local Conservative Association and twice stood unsuccessfully in parliamentary elections.

Rebe Bradford died in 1945 and Thomas later married Kathleen (Kitty) Percy, the widow of Brigadier Jocelyn Percy, who had commanded 151 Brigade at the Battle of El Alamein in 1942.

Where to find more about this person:
The Bradford Brothers Website:
http://www.thebradfordbrothersofwittonpark.org.uk/thomas_bradford.php