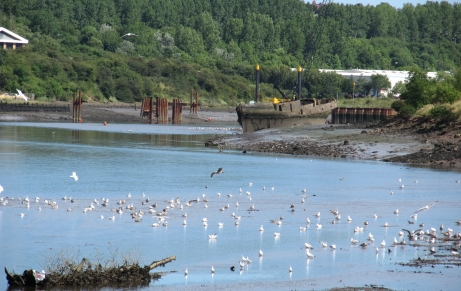 The wreck of the Steam Tug Cretehawser

All British built concrete ships built between 1917 and 1920 were given names with the prefix Crete, hence Cretehawser.

On 15 March 1919, the Steam Tug Cretehawser was launched by the Wear Concrete Building Company Ltd, the first of an order for eight such tugs placed with the Sunderland shipyard by the Ministry of Shipping. Fitting out was completed by the end of the following month. Cretehawser, and others of her class, were designed to tow large concrete barges carrying iron ore from Northern Spain to Britain. Two other tugs, Cretecable and Creterope, were completed by the Sunderland company in 1919.

The deck house and foc’sle were concrete but the bridge and parts of the deck were wooden. The foc’sle was designed to take a gun mounting but this was not fitted as she was launched after the armistice. There was accommodation for a crew of 17.

Concrete barges, which were not built at Sunderland, were 180 feet long with a beam of 32 feet and a gross registered tonnage of 745 tons and could carry 1,000 tons of cargo. They were fitted with steam powered steering and a steam towing winch in the bow. Both the tugs and barges were built to standard designs with some as built local variations.

The Wear Concrete Building Company was formed by the Tyneside shipbuilders Swan, Hunter & Wigham Richardson Ltd in 1918 to take advantage of a government programme to build 154 concrete vessels at a cost of four million pounds. The programme envisaged that new shipyards would be opened and others expanded to build the biggest fleet of concrete vessels in the world. Swan Hunter had opened a new shipyard on Wearside, at Southwick, in 1912 to provide additional capacity as they had orders for colliers, coasters and Great Lake Steamers that could not be fulfilled by their Tyneside shipyards. After the outbreak of the War production at Southwick was switched to the War effort and further capacity was needed to build the concrete tugs. Land on the north bank of the river, west of the Queen Alexandra Bridge, was acquired in 1918. The site was capable of accommodating seven or eight berths for ships up to 300 feet long. Two other north eastern companies took part in the programme: at Amble two tugs were built by the Amble Ferro-concrete Company Ltd and two barges were built at Thornaby by Blackett & Co of Darlington.

The decision to build using concrete can only be understood against a backdrop of crippling merchant shipping losses from enemy action, particularly submarines. In 1917 alone 3.6 million tons had been, lost far more than British shipyards could replace quickly. It was assumed that building with concrete used new materials and construction techniques which did not take skilled manpower and scarce resources – such as iron plates – away from established shipyards. This was not without risk, as British shipbuilders had no experience in working with concrete, only a few small experimental concrete boats had been built abroad and there were concerns about how large concrete craft would handle at sea. Another concern was whether damage, caused by a collision or grounding, could be satisfactorily repaired away from one of the specialised concrete shipyards.

It was hoped that concrete tugs and barges would prove to be cheap to build but this was not to be – the average cost of a concrete barge was £27,000, which was 37% more than an equivalent steel barge. Also, there are indications that building in concrete proved to be more difficult than anticipated and skilled labour had to be drafted in from the cement industry to assist with building. At the Wearside yard construction was supervised by Peter Lund and Co. a London firm who described themselves ‘as Concrete engineers and Constructors.’ General carpenters were also needed to make shuttering as part of the building process and some may have been transferred as needed from Swan’s Southwick yard.

The Armistice led to the end of the programme and the contract to build more tugs at Sunderland was cut back then cancelled. The Ministry of Shipping reduced their original order from eight to five tugs in the autumn of 1919 and cancelled the remaining two by the end of the year. The last tug was completed at Shoreham, in West Sussex, in 1920, and in all 12 tugs and 54 barges had been built. government moved quickly to signal that future concrete ship building would be left to the private sector and to sell off the finished tugs and barges. Most were sold to the newly formed London based Crete Shipping Co. The company used the tugs and barges to ship coal from the North East to the south coast and the near continent. A number of early losses due to collisions and strandings suggests that the sea-going tug and barge concept was not without its limitations. They were also costly to operate – there were problems with insurance premiums and harbour dues – and they may have been less than competitive in an overcrowded post war shipping market.

The future of the Wearside concrete ship yard was in doubt as soon as the Ministry of Shipping cancelled its contract. Swan Hunter attempted to keep the yard going by subcontracting work from its Southwick yard. In 1920 a small coaster – the Island Queen – was built and, in 1922, a general cargo ship may have been built at the yard but the evidence for this last is not conclusive. The yard was then mothballed and, in 1924, disposed of.

The working life of the Sunderland built tugs was typical of the Crete Shipping Co.’s fleet. Creterope was dismantled and converted to a hulk in 1923-4. Cretecable had a short but eventful career. In June 1920 she sank after hitting the north pier at Yarmouth and was re-floated and repaired. Three months later when she was towing the barge Creterock north from Shoreham to the Tyne, Creterock collided with a trawler off the Humber. Later during the same passage, Cretecable ran aground off Wheathall point, near Whitburn, and both she and the barge Creterock were lost.

Cretehawser, however, proved to be a survivor! By 1935 she had reached the end of her commercial life and was sold to the South Stockton Shipping Company Ltd for scrap. The resulting hulk, along with that of the Amble-built Cretestem, was bought by The River Wear Commissioners for use as an emergency breakwater and moored in the South Dock. In 1942 Cretehawser was holed during an air raid and towed up river and beached not far from where she was built. In 1943 Cretestem was sunk in the South Dock in another air raid.

At the beginning of the next century Cretehawser’s future appeared to be in doubt when a tidy-minded Sunderland City Council was redeveloping the riverbank, but her importance was recognised and she still lies on the inter-tidal mud beneath Claxheugh Rock – proof of the durability, if not the success, of concrete ships.