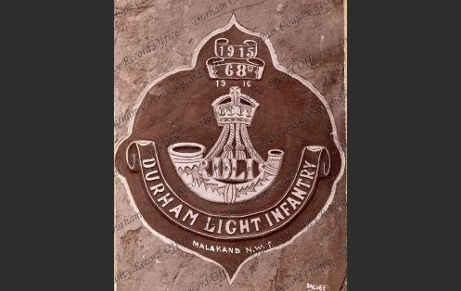 Before the First World War began in August 1914, the Durham Light Infantry, County Durham’s own infantry regiment, was made up of nine battalions each of about 1,000 men. There were two Regular battalions of full-time professional soldiers, many of whom came from outside the North East of England; two Reserve battalions of part-time volunteers and ex-Regular soldiers; and five Territorial Force battalions of part-time volunteers centred on key County towns. There was also the DLI’s Depot or headquarters shared with the Northumberland Fusiliers at Fenham Barracks in Newcastle upon Tyne.

By the end of the war in November 1918, the DLI had grown to 43 battalions, as new Reserve, Service, Territorial, Young Soldier, and other battalions were formed. Of these 43 battalions, 22 served in war zones from the Western Front to the North West Frontier of India.
——————–
The 1st Battalion DLI was a Regular battalion and in August 1914 was on garrison duty at Nowshera in India, under the command of Lieutenant Colonel Charles Luard. The battalion had been absent from Britain since October 1899, when the battalion had sailed for South Africa and the Boer War.

Though many of its soldiers had experienced hard fighting in South Africa and on the North West Frontier of India, the 1st Battalion DLI was not recalled home when the First World War began. Instead the battalion remained in India fighting small police actions against the Mohmand and other frontier tribes between 1915 and 1917. However, some of the battalion’s specially trained Regular soldiers, for example signallers, were sent to join other units fighting in German East Africa (modern Tanzania) and Mesopotamia (modern Iraq).

In November 1917, 1 DLI left Nowshera for the relative peace of Rawalpindi and was there on 11 November 1918, when the Armistice ending the First World War came into effect. Peace, however, did not come to British India and there was widespread rioting against continuing British rule.

In 1919, an Afghan Army, taking advantage of the political unrest in India, crossed the border. The Afghan invasion was quickly defeated. However, though 1 DLI saw little action in this brief war, all the Durhams who took part received an Indian Service campaign medal to add to the 1914-15 Star, British War Medal and Victory Medal already awarded for the earlier fighting on the frontier.

In late 1919, the 1st Battalion DLI began to return to Britain, with the last of the battalion finally landing in Liverpool in February 1920. Most of the battalion’s soldiers were demobilised but a new 1st Battalion was soon formed at Tidworth under the command of Lieutenant Colonel Hubert Morant and, in early March 1920, was sent to Cologne to join the Army of Occupation in Germany.