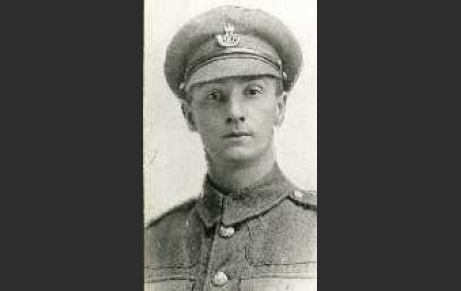 Arthur Leggett was born in Craghead. He grew up in Chester-Le-Street where he lived with his eight brothers and sisters and their parents, William and Victoria Leggett. In April 1911 he was employed as a saddler. He had recently become a Private in the Territorial Army when he enlisted in the 8th Battalion, Durham Light Infantry (DLI) on 13 March 1911.

On the outbreak of war, he answered the appeal for Territorials to volunteer for overseas service. He landed in France on 19 April 1915 just as the Second Battle of Ypres was about to begin. Less than a week later, on 25 April 1915, the 8th Battalion, DLI was in the thick of the fighting around Boetleer’s Farm. Private Arthur Leggett lay with shrapnel and bullet wounds to his back and lungs. He was carried away to a farm building by Private James Winn but was eventually made a prisoner of war when the Germans overran the farm.

He was carried to a hospital behind the German lines. Within a few days most of the other patients were sent on to Roulers but he and two others were too ill to be moved. The other two men died but, after about four weeks, he managed to get moved to Roulers by faking his temperature chart.

At Roulers he was operated on without an anaesthetic but treated well. By July 1915 he was well enough to be moved; first to Minden; then to Sennelager prison camp.

After spells at Ossendorf, where he worked on a farm, and Staumuhle, he returned to Minden on 7 January 1917. He was then sent to Dankerson for about six weeks but returned to Minden when he and others refused to work. As a punishment they were sent to work in a factory at Rheda. When they found out that the factory manufactured shells they again refused to work. As a punishment they were made to stand still until 10 o’clock at night. Their overcoats, mufflers, gloves and beds were taken off them and they had to sleep on a stone staircase. They received the same treatment the next day and were only given a slice of bread and some thin soup to eat.

This treatment continued from Monday till Sunday when they had to give in and returned to work. The next day he reported sick and was sent back to Sennelager.

After a short uneventful spell in Dulmen he was sent to Mulheim to work in a quarry.

In June 1917, after an unsuccessful escape attempt, he was sent to Friedrichsfeld and sentenced to 21 days’ imprisonment for escaping.
He was then sent to Mulheim and back to Friedrichsfeld where he spent the winter.

On 28 February 1918, he was sent to Wermelskirchen where he was billeted in a public house and made to do various types of work.

On 3 April 1918, he escaped with Private Martin Lavin of the Cheshire Regiment and after eight days reached Holland.

He was interviewed by the authorities on his return to England and gave an account of his treatment as a prisoner of war. A transcript of this interview can be found at the National Archives (WO 161/100/222). Another account of his escape can be found in the Chester-le-Street Chronicle of 17 May 1918, and summarised on the Durham at War blog http://ww1countydurham.blogspot.co.uk/2018/01/the-great-escape.html

Arthur received a Military Medal for his escape from the prisoner of war camp. The notification for this was published in the London Gazette on 30 January 1920 with the following citation: “On 3rd April 1916, after two failures, he escaped with another soldier from an outside working party, and, after many adventures, reached Holland, from where he was sent home.”

The 1939 Register shows that Arthur Leggett remained in Chester-le-Street, and marrying Elsie Greenfield in 1920. On 16 January 1921, they had a son, Roy, who is shown on the register as being a chartered accountant and articled clerk. The register also shows that Arthur has his own newsagents and tobacconists. A photo of this can be seen on the Durham Record http://dre.durham.gov.uk/pgDre.aspx?&SEARCH=Search&TERM=DR00613&ID=DRE586

You are very welcome! Good luck with your research. Let us know how you get on!

I am delighted to read this article, I have just started tracing my family tree on my mothers side and I am convinced that Arthur is my grandfathers brother. I was named after my grandfather, Edward and my mums older brother was named Arthur after his uncle. I will definitely be tying in this article with other members of my family, the names of the siblings also match information I am working with. Thank you