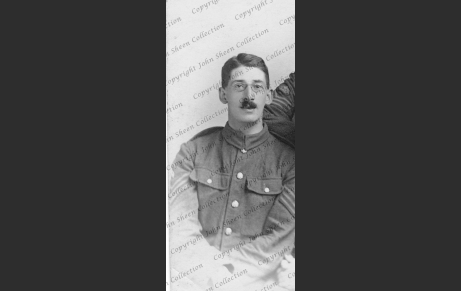 Detail of a larger photograph: CQMS Christopher Gaines. With many thanks to John Sheen, from his personal collection.

Christopher Gaines was born in Monkwearmouth, Sunderland, County Durham, in 1887. He was still living in this place when he enlisted with the Durham Light Infantry in Sunderland on 24th September 1914. Just four days later, he got married to Ann Gregson in Newcastle Upon Tyne.

He had already served with another unit and on the 2nd of October 1914 he was first posted to 18th Battalion DLI. In December of that year, he was one of the soldiers from 18th DLI who participated in the defence of Hartlepool during the German bombardment.

During the years after the war, Christopher Gaines moved to Lancashire, where he died in September 1942.