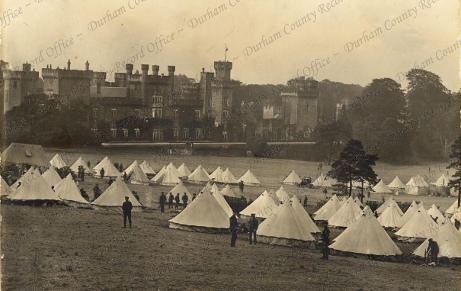 The grounds of Ravensworth Castle, the residence of Arthur Thomas Liddell, Lord Ravensworth, 5th Baron, JP (1837-1919), were used as a British Army brigade training camp at the beginning of the First World War.

151 Brigade was part of the 50th (Northumbrian) Division in the Territorial Force.

The first lines of the 6th, 7th, 8th and 9th Battalions of the Durham Light Infantry (DLI), a total of 4,000 men, camped in the park facing the castle from August until late autumn in 1914.

The 8th Battalion DLI moved into camp on 19 August 1914. Here is a description from the battalion history:

‘The site of the camp from a picturesque point of view was charming, the lines being pitched immediately in front of the castle with its terraced garden, but later on when wet weather became pretty general the ground settled into a quagmire which will not easily be forgotten even after an experience of Flanders’ mud. The whole of the Brigade was concentrated here, and training was vigorously carried out on the fell above the camp and in the surrounding countryside… After three weeks at Scott’s House a return was made on September 23rd to Ravensworth…

…The camp at Ravensworth was now pitched upon new ground in the park, some distance from the Castle and, except that it entailed a longer walk into Gateshead and Newcastle, was perhaps a better site; certainly it did not prove so muddy. Here owing to the shortage of tents some of the Companies were accommodated in very large marquees, one of which was entirely wrecked during a very stormy night in October. Numbers of the men took their blankets into a neighbouring plantation, whilst others were squeezed in with other Companies and into the officers’ mess hut for the rest of the night. Some very hardy, or perhaps very lazy, remained under the fallen canvas…

As time went on the weather became generally cold and wet, and it was with a feeling of relief that the Brigade moved into billets in Gateshead where it remained until its departure for the Front in April 1915.’
from E.H. Veitch: 8th Battalion The Durham Light Infantry 1793-1926 (1926)