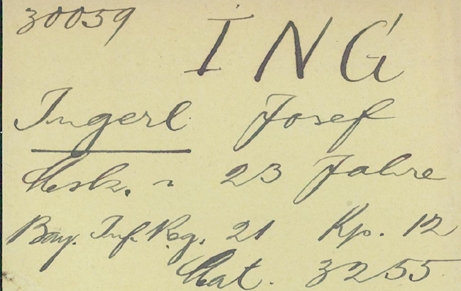 Josef Ingerl was born in Stausacker an der Donau [on the Danube] on 21 July 1894. Though military records exist, the handwriting and abbreviations make it difficult to extract all the information when it is in German. Ingerl was possibly mobilised on 30 November 1914 and served with at least two regiments.

Ingerl was taken prisoner of war on 13 November 1915 during fighting at Neuve Chappelle, serving with the 21st Bayern [Bavarian] Infantry Regiment. He was initially sent to Frongoch Camp, North Wales, arriving on 25 March 1916. Later in 1916, the German prisoners of war were moved out of the camp to make way for the Irish prisoners taken from the Easter Rising. The International Committee for the Red Cross prisoner of war records show that Josef Ingerl was sent to Handforth Camp, Cheshire on 19 May 1916. This was a parent camp to a large number of smaller camps across the north, so it is uncertain when Ingerl spent any time at Handforth. Certainly by June 1917, he was at the prisoner of war camp at Stanhope, County Durham, and working with other prisoners in a quarry.

It was whilst working at the quarry that Josef Ingerl had a tragic accident. On 5 June 1917, he fell down the side of the quarry and died of his injuries. A brief report on the inquest appeared in the Sunderland Echo on 8 June 1917 which notes that the three witnesses, also prisoners of war, said that it was simply an accident. The Red Cross records show that his family was contacted on 20 June 1917.