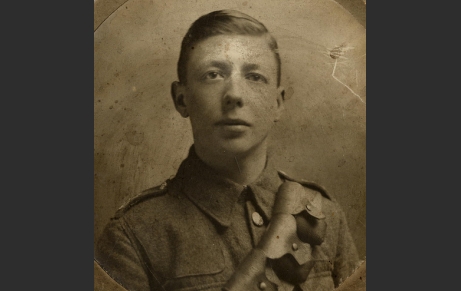 His army service records survive in The National Archives and can be viewed online on the Ancestry website. He was described as an intelligent, steady and reliable man, and a good groom.

Joseph made a will and wrote a last letter to his mother on 6 August 1914, the day when he returned from guard duty at Hebburn Dock to the battalion at Lichfield:

” … I dare say that this will be the last letter you will receive from me until the war is over as I am prepared to move to the front at any moment, and I am only sorry that I did not see you before I went but there mother dear, do not lose heart, I may come back again. I have sent all my belongings to you, a portmanteau with all my clothing, and there is a bicycle too, but that later on as I sent it away to be ‘done up’ …
It is a very nice machine and worth a lot of money …
Oh it’s simply deffning [deafening] here, with the noise of people rushing to see their wives and mothers before they go away. It is very pitifull to see great big men fainting in the ranks, it makes one lose heart …
mother dear, do have courage. I will be alright, there are thousands of other mothers & relations in the same circumstances and if I do die I will die with a good heart and all your love upon my life. I now must close as I have plenty to do and so short a time …”

Read more about the release of thousands of First World War soldiers’ wills by HM Court and Tribunal Service: https://www.gov.uk/government/news/thousands-of-war-heroes-wills-released

Enlisted in 6th Battalion Durham Light Infantry (no. 1433) at Wolsingham on 25 May 1911
Enlisted in 2nd Battalion Durham Light Infantry (no. 11212) at Sunderland on 24 August 1911
Joined British Expeditionary Force in France on 8 September 1914
Promoted Lance Corporal on 2 October 1912
Promoted Corporal on 12 March 1914
Reverted to rank of Private at own request at Cambridge on 11 August 1914
Army service records include a description of his tattoos and a conduct sheet recording several reprimands for misdemeanours
Wounded by gunshot wound to abdomen on 13 October 1914
Transferred to hospital at Hazebrouck by 18th Field Ambulance
Died of wounds on 14 October 1914