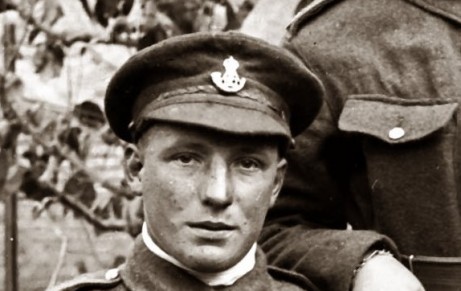 In summer 1916, whilst the Battle of the Somme was raging less than 10 miles away, hundreds of British soldiers, including men from the DLI, had their photographs taken by an enterprising French photographer in the village of Warloy-Baillon.

Before the Battle of the Somme began on 1 July, this village had become home to an advanced operating centre based in the local civilian hospital, wooden huts and tents. There was also a motor ambulance park and repair shop, and a cemetery. And, in the surrounding villages, farms, fields and woods, soldiers were billeted or bivouacked, and trained hard for the coming battle.

But who were these DLI soldiers who had their photographs taken in Warloy-Baillon?

Looking carefully at these photos, whilst it is not 100% certain, it is likely that all these men were from the 6th, 8th or 9th Battalions DLI. And some were definitely from the 6th Battalion.

If you look closely at the men’s tunics, you will see that most have shiny brass buttons with the Royal Crest (like a £1 coin). This type of button was worn by most British, including DLI, soldiers in the First World War. But one or two of the tunics have dark buttons with a bugle in the centre. These black buttons (made of bone) were only worn by the 6th Battalion DLI. However, other photos in the DLI’s archive show that not every 6th Battalion soldier was given these distinctive buttons, probably because there were simply not enough to go round.

So was the 6th Battalion DLI anywhere near Warloy-Baillon in the summer of 1916? And what about the other DLI battalions?

In early August 1916, the 50th Division, including the 6th, 8th and 9th Battalions DLI of the 151st Brigade, was ordered south from the Ypres Salient to join the fighting on the Somme. Moving by train and route marches, 151 Brigade finally stopped in Baizieux Wood, a few miles south of Warloy-Baillon on 17 August 1916. There, despite days of rain, the three battalions began intensive training for the Somme fighting. The soldiers with special skills, such as the Lewis machine gunners and signallers, received their own special training. And it is possible that the battalions’ buglers and bandsmen, who also doubled as stretcher bearers, received their special training in the hospital complex at Warloy-Baillon.

On 10 September 1916, the three DLI battalions left Baizieux for the Somme front.

A new Story Page on the Durham at War website has been created for each of these unknown DLI soldiers.

Search for UNKNOWN SOMME SOLDIER and you will not only be able to see a close-up of each soldier’s face, but also read about the uniform and badge clues found in each photo, and what these clues might be telling us.

If you want to know more about these photographs, see The Independent of 1 August 2014, LOST PORTRAITS OF THE SOMME.