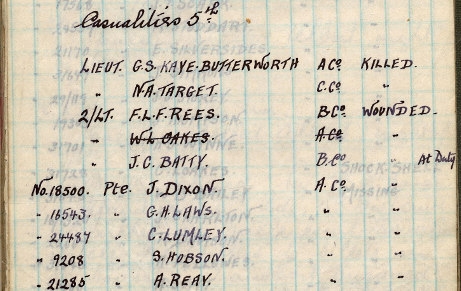 Account of the night attack in which George Butterworth was killed

The following war diary extract reveals the desperate situation and breathless pace of events around the night attack on 5 August 1916 when Lieutenant George Butterworth was killed.

1:40 am. Brigadier on advice of Brigade Major decided not to carry out another attack.

1:48 am. Lieutenant Beale, 10th West Ridings, phoned he had taken up position in O.G.2 to which he had been ordered by Brigade after it had been evacuated by C Company, 10th Northumberland Fusiliers.

2:07 am. Lieutenant Davenport found our guns were shelling his platoon on left of Butterworth trench.

2:20 am. Lieutenant Clarke found that [Lieutenant] Target was killed and most of his men; that he was collecting men of D Company, under 2nd Lieutenants Saint and Atkinson and sending them up Munster Alley.

3:33 am. Asked Lieutenant Clarke to supply 2nd Lieutenant Batty with 10 men to go round to west entrance of Torr trench and try and get trench mortar from Anzacs.

3:41 am. Received following from Lieutenant Clarke:
“We must have reinforcements up at once AAA The platoon of A Company has not turned up and the men I have got there are being kept there with revolvers.”

3:41 am. Gave 2nd Lieutenant Batty message for Butterworth to reinforce Munster Alley with one platoon at once.

4:49 am. Forward Observation Officer (FOO) reported that our party in Munster Alley was being heavily bombed, but that we were apparently holding our own.

About 4:45 am Lieutenant Butterworth killed.

9:00 am. A Company’s bombing party relieved.

The war diary of the 13th Battalion, The Durham Light Infantry, volume I, 20 May 1916 – 31 August 1917, was written by various adjutants, and compiled by Captain W.J. Arris, M.C. when the battalion was disbanded.