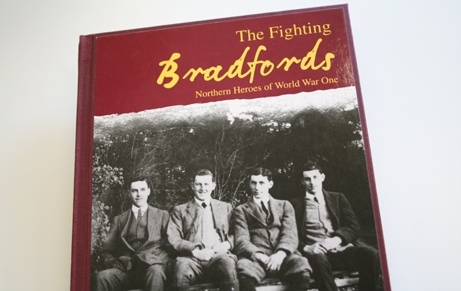 The Fighting Bradfords by Harry Moses

Only two brothers were awarded the Victoria Cross during the First World War – George and Roland Bradford of Witton Park, County Durham. George was an officer in the Royal Navy and was awarded a posthumous VC in 1918 after the Zeebrugge raid. Roland was in command of the 9th Battalion DLI when he was awarded the VC in 1916 during the fighting on the Somme. He was killed in action in 1917. But there were two other Fighting Bradford brothers – Thomas and James. Both also received bravery award during the war, but, when the war ended, only Thomas had survived the fighting. This is the brothers’ fully illustrated story based on official and family sources, many never before published.