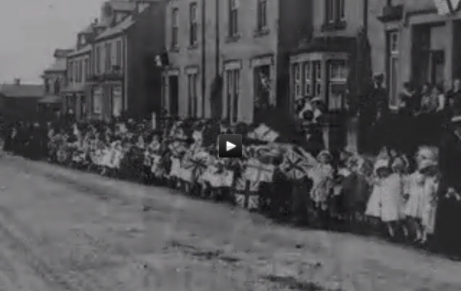 Film of the arrival of Michael Heaviside VC in Stanley

There are two known versions of the film that shows the official welcome for Private Michael Heaviside VC when he returned to Stanley on 12 July 1917.

The Imperial War Museum film (IWM 1179) is 3:55 minutes long and you can watch it on the IWM website:
Arrival of Private Heaviside VC in Stanley
http://www.iwm.org.uk/collections/item/object/1060000167

The film in the Beamish Museum collection is 3:30 minutes long and you can watch it on YouTube:
Private Michael Heaviside VC arriving at Shield Row station
https://www.youtube.com/watch?v=253mvwa1-34#t=5.194714

The archive film at the Imperial War Museum contains additional footage of Heaviside on the balcony of Stanley UDC council offices that is not on the Beamish Museum version.

Research for the Durham at War project has revealed that this film contains the first known image of the Craghead Colliery banner that was unfurled by John Johnson in 1909.

Norman Emery (Banners of the Durham Coalfield, 1998) comments:
Watching the amazing film it looked as though the banner was a patterned silk, which would suggest it came from the Tutill jacquard loom. The design shows the two miners shaking hands, the one on the left with his pick over his shoulder, and the one on the right holding a safety lamp. Rising between them is the angel, and the motto ‘He that would be free must strike the blow’. This is also a standard Tutill pattern book design. Everything suggests it is the 1909 banner.