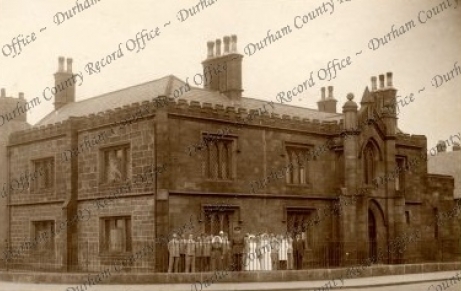 Hospital established in Seaham by Marchioness of Londonderry

Seaham Harbour Infirmary underwent three phases of development since its construction by Frances Anne Vane-Tempest (Marchioness of Londonderry) in 1844. It cost £800 to build, which was mainly sourced from the sale of her book, A Three Months’ Tour in Portugal, Spain and Africa, published in 1843.

Phase I
The infirmary was described to be a Gothic-style stone building on the junction of North Terrace and Tempest Place. It acted as a port of call for most patients from Seaham Harbour and district. A compulsory levy made on every ship visiting Seaham Harbour from 1855 onwards meant that all seamen visiting Seaham were also granted free admission to the Infirmary. With the Marchioness herself as the patroness, the Infirmary was managed by a committee of 12, who were elected annually by subscribers who funded the running of the facility. It was further staffed by a resident surgeon and several physicians. Reverend Angus, incumbent of Seaham Harbour, seemed to have oversaw the running of the Infirmary around 1851, making regular reports to the patroness, the Marchioness of Londonderry.

Being the central medical facility in pre-war Seaham, the Infirmary was often the epicentre of local tragic events. A local newspaper clipping from 19 October 1861 detailed the unfortunate death of Francis Hunt, a shoemaker at Bishopwearmouth who was in Seaham visiting his sister. He was crossing Seaham Railway on foot when he was run over by a train. He was taken to Seaham Infirmary but died shortly after. Around the same time, two boys were admitted with serious burns: they struck a match on board the brig “Times” when the brig exploded. This was concluded to be due to the hatch being put down overnight on freshly loaded coal, which caused an accumulation of flammable gas. It was not reported if the boys made a full recovery at the Infirmary.

It was said that murderess Mary Ann Cotton possibly worked at the Infirmary in summer 1865.

Phase II
The second phase of the Infirmary saw it become a military hospital during the First World War. It was also known as the Seaham Infirmary Military Hospital. The Infirmary was reported to have taken in mainly the sick from 4th Battalion Durham Light Infantry, who were stationed and training in Seaham at the time. By 1916 it was apparently “full of wounded soldiers” who needed to focus on recovering. It was due to this reason that Seaham Infirmary strongly opposed the plans of building a new club right next door.

Beyond treating the wounded and sick, the Infirmary also held regular fundraising football matches and was registered as a charity under the 1916 War Charities Act. Towards the end of the war, the Infirmary was managed by Miss HW Glass as matron. Other core staff include Major LG Dillon as medical officer, Mr. W Smith as secretary as well as Private Reeves.

Phase III
Phase III saw the Infirmary transform into administrative buildings. The Infirmary became council buildings between 1920-1964, after its closure as a medical facility in 1918. Meanwhile, the Seaham Harbour Infirmary Fund remained an active charity into 1938. The building also served as a Town Library before the structure was demolished in 1969.

D/Lo/F/1129(5)
Letter from the Director of the Seaham Convalescent Hospital, possibly for the Press

D/Lo/F/1129(5)
Letter from the Director of the Seaham Convalescent Hospital, possibly for the Press
History of the Seaham Infirmary
By Fred Cooper