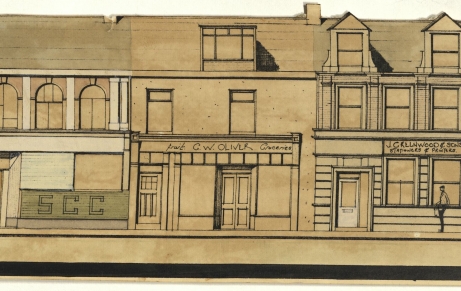 Used by the War Department as a storehouse.

North Terrace refers to the center section of North Road, which traverses the Seaham Coast. Along with Front Street and Tempest Place, the land rights for North Terrace were granted by the Marquis of Londonderry to a handful of men in 1843.

Phase I:
The late 19th century saw North Terrace quickly developing into a commercial area, as it opened up directly onto Seaham Harbour. Among the shops were beer houses owned by JT Mickman, and JL Robinson, as well as shoe makers, confectioners and dressmakers. A key structure erected on the junction of North Terrace and Tempest Place was the Seaham Infirmary. While no exact address given, an advertisement for the sale of a house on North Terrace in 1855 – with 14 rooms and 2 fronts, demonstrated the hefty investment into this new, seafront area.

Immediately prior to the First World War, 11 North Terrace housed Phalp and Co., wholesale and retail drapers. North Terrace still faced the sea, though Terrace Green had been set up, as well as a rifle range.

Phase II:
11 North Terrace was used in the First World War as a storehouse. It may even be the storehouse referred to in the Urban District Council minutes, from which 50 pounds of soap meant for the Infirmary were stolen.

Nearby public facilities, such as the post office of 13 North Terrace and public house King’s Arms on 9 North Terrace remained in use. At the same time, plans to build a new club on North Terrace for servicemen were proposed – and strongly objected to by the Infirmary on the same street.

Phase III:
Post-war recovery meant a boom in new business on North Terrace, the newest additions, including Adamson’s draper and outfitter; and the “druggist” Mrs French. A license to sell and store petrol was also granted to neighbouring 14 North Terrace – indicating a rapid mechanization in the area.

This continued into the 1950s, when some of the shops evolved to bear administrative and religious functions. The HM customs and Excise Offices and Jehovah’s Witnesses set up offices along North Terrace. Printers J Greenwood and Sons of 13 North Terrace created artwork depicting the shopfront of 11-17 North Terrace. At this time, 11 North Terrace had become a hall for an organization by the name of “SCC”. This drastic shift may have been spurred on by the Improvement Scheme for Church Street, North Terrace and Bath Terrace by the Londonderry Administrative Services Ltd. in around 1951, which they affectionately called a “facelift” for Seaham.

The 1970s saw North Terrace develop into a hospitality centre. Though exact addresses are not known, there was at least one casino and two hotels.

While 11 North Terrace was utilized briefly as a military storehouse, the entire length of North Terrace could be considered a microcosm of the town’s commercial development, which had evolved from retailing raw materials into providing tertiary hospitality services – all within about 100 years. North Terrace retains its role as a commercial hub today, still overlooking Terrace Green (with a war memorial) and the sea.

North Terrace has been a private dwelling since 1995 and remains standing today.

Keys to the Past
http://www.keystothepast.info/article/10339/Site-Details?PRN=D47195

Lands and buildings in the occupation of the War Office