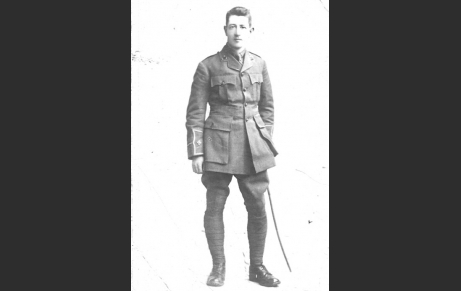 Members of 6th Battalion, DLI, Walton is indicated, with thanks to the family

Officers, Walton on the right, with thanks to the family

with thanks to the family

Officers, Walton in the centre, with thanks to the family

Henry Walton was born in 1888 in Bishop Auckland to Michael Walton – waggoner for the Co-op – and Emma White. He was the youngest child of the family.

After leaving school at the age of 12, Henry worked as an errand boy before starting work for the Co-op as a clerk. By the outbreak of the first World War, he was working at the Co-op in Coundon, Co. Durham.

Henry married Louisa Pattison (also from Bishop Auckland) in 1912 and they had one daughter – Dora, born in 1912.

In August 1914, Henry was a company quartermaster sergeant in the 6th battalion (territorial) of the Durham Light Infantry. The battalion was training at its summer camp when war broke out. From August 1914 to April 1915, the battalion was occupied with training near Newcastle upon Tyne.

In April 1915, the 6th battalion was sent to the front line in the Second Battle of Ypres. They subsequently fought all along the Western Front including Arras, the Somme and Ypres again. Henry was promoted to acting second lieutenant in February 1916 and acting captain in April 1917.

Military Cross
In April 1917, the battalion was posted to the front line at Wancourt Tower near Arras. Four companies, W, X, Y and Z were ordered to attack at dawn on 14th April.
Henry commanded X Company at this point.

From The Story of the 6th Battalion, The Durham Light Infantry, France April 1915-November 1918

‘At 1 a.m. on the 14th April the men moved to the assembly position in the dry bed of the Cojeul River, with the 8th Battalion in support and 5th Border Regiment in reserve, the 9th Battalion being already in a line just south of Guemappe. The original orders had now been considerably altered, and zero hour arrived before fresh orders had been circulated to the Companies. The result was that at 4.30 a.m., after moving in file from the assembly position to a bank, some 200 yards in front, the Battalion advanced under a barrage in four waves of Companies, W being front and Z in rear, with no orders except a rough indication of the direction.

As they advanced they were met by very heavy machine-gun fire from the front and from Guemappe in their left rear. W and X Companies reached the ridge 500 yards from the starting point, and passing down the other side, were not seen again during the day. Y and Z Companies also reached the ridge, but could get no further. Later they were joined by the 8th Battalion, which was also held up. The fighting then died down, but apart from one brief message from X Company no trace could be found of the two front Companies, and the casualties in the remaining two were very heavy. To add to the confusion, the 56th Division on the right had lost direction, and men of the London Regiment were everywhere mixed with those of the 50th Division.

At dusk orders were received that the line on the ridge would be taken over by the London Rifle Brigade. As soon as the light permitted search was made for W and X Companies. Eventually the remnants consisting of 4 officers and about 20 men were discovered.

Having reached a small system of trenches, they had organised their defence and successfully beaten off determined attempts to surround them. About 80 men were finally assembled after the relief, and more joined the Battalion during the next few days, but the casualties amounted to over 200, or more than 50 per cent, of the total fighting strength. The officers killed were Capt. Brock, Lieut. Richardson, and 2nd Lieuts. Greener, Payne and Newton, whilst many were wounded. Capts. R.S. Johnson and H. Walton, commanding W and X Companies, were subsequently awarded the Military Cross, and Corporal Betts the D.C.M. and Croix de Guerre.’

Death
Henry was killed in the German Spring Offensive of 1918. During Operation Michael in the first week of the offensive, the battalion was defending the line near the village of Rosieres en Santerre when Henry was killed by a shell.

In the words of one of his comrades Corporal T. Goodfellow writing to Henry’s widow Louisa on 3rd April 1918:

I am so sorry to have to write this letter but I think you will wish to know that I was in the vicinity when Captain H Walton M.C. was killed. He was in the front line at [?] when the Boches came over and was instantly killed by a shell. You will be pleased to know that he had no suffering and died like the brave man he was – facing the foe and doing his duty.
The boys thought the world of him and would go anywhere with him = in fact the Col. wept when he got to know the news on the same night …..
I carried him myself to headquarters (with four stretcherbearers) and he was buried against headquarters and a cross erected on his grave. If you wish to know any more – the above is where I now am in hospital – wounded.

May …. my heartfelt sympathy with you in your great sorrow and loss.

From Henry’s commanding officer Lieutenant Colonel Fred Walton, with whom he had fought since 1914:

Dear Mrs Walton,
Please accept my heartfelt sympathy in the sad loss you have just sustained. Your husband and I were close friends and I feel his loss very keenly indeed.

He will, I am sure, be greatly missed in the battalion, where he was considered one of the best company commanders we have ever had.

I am sending you a small snapshot of him as I know you will be glad to have such things at this time and shall let you have any others I may come across in the near future. They are, of course, prohibited.

Could you please let me have one of his latest photographs.

Henry is commemorated on the Pozières memorial in France.


Medal(s): Victory Medal
Military Cross, 14 April 1917, citation: ‘For conspicuous gallantry and devotion to duty. He reached the enemy trenches in advance of the line which was eventually consolidated. By his skill and courage he resisted the enemy’s efforts to surround the party, and at night he successfully extricated his men from a very precarious position.’