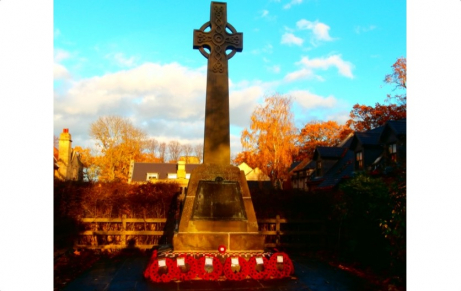 Nunthorpe War Memorial, 2018, with thanks to MS Thompson

Nunthorpe War Memorial, 2018, with thanks to MS Thompson

Plaque on Nunthorpe War Memorial, 2018, with thanks to MS Thompson

Nunthorpe War Memorial garden, 2018, with thanks to MS Thompson

Middlesbrough soldier who served with a pals battalion

Edward F.Thompson was the son of Clara Ann (nee Rogers) and George Thompson and he was born in 1899 in Linthorpe, Middlesbrough, Yorks. The family moved to Nunthorpe, then a small village situated south of Middlesbrough. In 1917 Edward enlisted into the Durham Light Infantry. I believe
He was under age.

Clara’s family hailed from Suffolk, while his father George was born in Middlesbrough – his heritage went back to The Shetland Islands, Whitby, Yorkshire and Marske-By-The-Sea, Yorkshire.

Edward (fondly known as Pete) was one of 10 children and he was the beloved big brother of my father, Herbert Y Thompson, who was the youngest of the children. He was the big brother who carried my father when he was tired, who picked him up when he fell and who always stood up for him when he was in trouble and Edward was loved by all his siblings. My father was 9 yrs. old when Edward was killed, and he was heartbroken.

My father never forgot his brother and he passed on his love and his childhood stories of Pete to me – but he never told me where the nickname Pete came from!

I was born long after Edward’s death and I only know of Edward/ Pete through my father’s reminisces and today, as I did yesterday, as I will tomorrow, I will remember Uncle Pete and those who fell with him and I will quietly place a poppy cross each Remembrance Day on the war memorial in Nunthorpe.