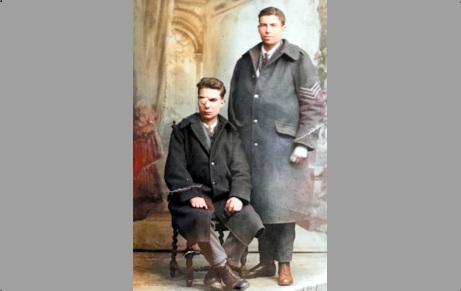 Fred Newby, seated, with thanks to the family

Joined the army to avoid the mines

Fred was born in 1899 in South Shields, Co. Durham. In 1915, his father , Adam Newby, was killed in a mining accident at St Hilda’s pit. Fred was determined to not go down the mines so, when he was just 17 years old he enlisted in to the Army Reserve in 1916. He was too young for service overseas so had to wait until September 1917 to begin his training. He went to the 86th Training Reserve Battalion at Hornsea for training, and in December 1917 he was posted to the 4th Battalion, Durham Light Infantry (4 DLI). 4 DLI was a Home service Battalion based at Seaham where it was in charge of the harbour defences as well as training up men ready for overseas service and for those recovering from wounds. Fred arrived in France on the 1st April 1918 and arrived in Bonnay on The Somme battlefield at the end of the German Spring offensive of 1918. He joined his new Battalion 19 DLI. Others from Fred’s intake were posted to 22 DLI.

Fred then spent time in and out of the trenches around Martinsart and Aveluy woods (north west of Albert) where there were a series of raids and artillery bombardments over the next 8 weeks or so. Two of his friends that had been sent to 22 DLI were killed after a short time in France in the 24th/25th April 1918 in the fierce battle at Villers-Bretonneux.

On the 27th May 1918, another one of his friends who went to 22 DLI was listed as missing at Gernicourt where over those few days, 22 DLI suffered huge casualties and by June 1918 the 22 DLI ceased to exist.

Fred and his Battalion were ordered north to Ypres in July 1918 and took up a quiet position in the Locre sector and very little of note happened for a few weeks. They did take part in a raid on the Locre Hospice where a company from 19 DLI captured an enemy machine gun and took prisoners. Captain Ryall was awarded a Military Cross for his actions.

The final advance began in the Ypres sector and on the 28th September 1918, the battalion assaulted and captured Hill 60 and Canada tunnels and Klein Zillebeke.

On the 30th September 1918, the Battalion launched an attack on the Gheluwe Switch which was a heavily fortified and defended German line. The Battalion was halted only 200 yards from their start point and suffered heavy casualties. It was here that Fred suffered gunshot wounds to his neck and shoulder and lay injured overnight. Fred used to tell his grandchildren that it was here that he encountered a wounded German soldier and that they both decided to not kill each other. The German gave Fred his belt buckle. Fred was embarrassed that he has nothing to give the German other than some buttons off his coat. The German crawled away and it’s not known what happened to him. Fred was rescued the following day. It took 3 days before the Gheluwe Switch was eventually defeated. 19 DLI advanced on and were some of the first troops to enter and liberate Courtrai/Kortrijk. Fred was officially listed as wounded on the 29th October 1918.

Fred was sent back to England and the King George Hospital in Waterloo. He was medically discharged in April 1919 with a 30% disablement pension. He was deemed fit enough to work again some years later and joined the Merchant Navy as a Fireman and trimmer. In 1940 he enlisted in to his local home guard Battalion, 8 DLI. In 1942 he returned to the Merchant Navy and was on Home Trade voyages delivering coal from the North East to the Thames Estuary. He was medically discharged after the victory in Europe in July 1945 due to his existing Great War injuries.

He lived his life out in South Shields with his wife Ellen and his three children, Fred (My Grandad), Elsie and James. Fred died in 1972.