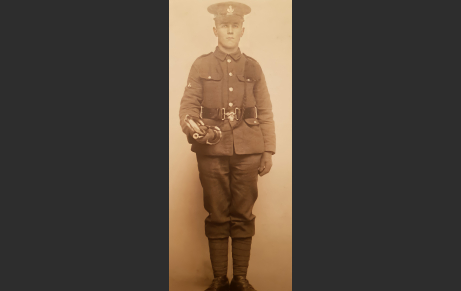 Sidney Victor Belson, with thanks to G. Belson

Sidney Victor Belson was grew up in Cippenham, Slough, with his family of farm workers. In December 1915, at the age of 19, he attested with the army. Due to his work on a farm, he was not mobilised until September 1916 when we joined 2/7th Durham Light Infantry. At this time, the battalion was training in Catterick, North Yorkshire, before moving to Andover, Hampshire, in November 1916.

In June 1917, Sidney was sent to France, heading to the 35th Infantry Base Depot (possibly at Etaples), and being placed with 1/6th Battalion, Durham Light Infantry who were in Divisional Reserve for rest and training. On 5th July 1917, he was transferred to the 20th (Wearside) Battalion, with who he served for the rest of the war. He was discharged in 1919 and returned to his work on a farm in Cippenham.

Sidney married Emily Lucy Wiggins in 1924, and they went on to have three children. Sidney died in 1969.

His great grandson has provided the following information:
As you can see [in the photograph] he was a bugler, he was also a runner. He didn’t speak much of the war, he said he fought with/in a Kent battalion, Royal West Kents were same division, in his first battle, “in” doesn’t tally with service record. He was not allowed back to his unit because of a gas attack, this makes me wonder if he was C coy on 31st July 1917 but that’s speculation. He also told of a time 12 runners were sent out with a message and he was the only one to survive. He talked of lice, waist deep mud, messages on sugar paper and training the yanks, of whom he was quite scathing! He was quite fortunate in that he was not the first draft sent home but the second in February 1919, again due to former occupation.

Wearside Battalion. The 20th (Service) Battalion of The Durham Light Infantry in the Great War