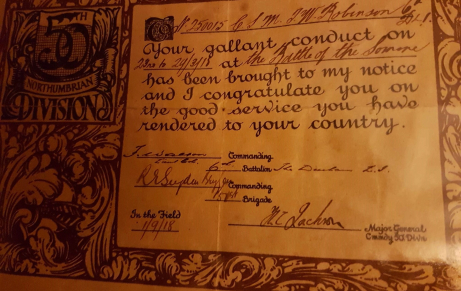 With kind permission of Neil R.

Thomas William Robinson enlisted in 1908 in the territorials and served in the 6th Battalion (service no. 612). He first went to France in April 1915 and was back in Leeds Infirmary on the 6th May 1915, having been injured in the Second Battle of Ypres.

He returned to the front, according to the medal roll for the British War Medal and Victory Medal, he served with 7th Battalion before re-joining 6th Battalion.

In 1918 he was a company sergeant major, with a (service no. 250015), and was mentioned in dispatches. He remained a territorial until at least 1922. Robinson’s residence is given as Raglan Street, Consett, on the absent voters list.

The medal records have Robinson listed as William.