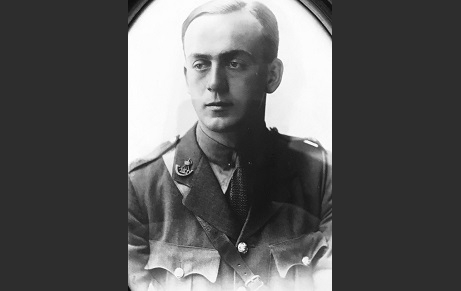 Photograph of John Moss Ward, taken following commission in May 1917 With many thanks to Mark Openshaw

Photograph of John Moss Ward, taken following commission in May 1917 With many thanks to Mark Openshaw

Photograph of John Moss Ward recuperating from illness at Ashgrove House, Hartlepool, summer 1918 With many thanks to Mark Openshaw

Group photograph of 3rd DLI officers, including John Moss Ward (third from left, back row). Taken in NW India, c1919 With many thanks to Mark Openshaw

Photograph of John Moss Ward while attached to 2/91st Punjabis in NW India, c1919 With many thanks to Mark Openshaw

Photograph of John Moss Ward, in corporal's uniform, April 1915 With many thanks to Mark Openshaw

Group photograph of officers and NCOs, E Company, 18th DLI Home Guard in front of Hartlepool War Memorial. John Moss Ward is sixth from left on front row. With many thanks to Mark Openshaw

Group photograph of five members of the Home Guard, including John Moss Ward (third from left) With many thanks to Mark Openshaw

Wedding photograph of John Moss Ward and Dora Scotson, June 1934 With many thanks to Mark Openshaw

Photograph of John and Dora's honeymoon in Torquay, Devon, June 1934 With many thanks to Mark Openshaw

Photograph of John Moss Ward with his daughter, Ann. Taken in front of Home Guard Headquarters, Clifton Avenue, Hartlepool With many thanks to Mark Openshaw

It is not known why John Moss Ward chose to enlist on the 18 January 1915. The early January weather had been foul, throwing heavy rain and strong gales at the north east. Temperatures plummeted. Ten days before Christmas, a German naval bombardment had sprung the full horror of war on Hartlepool resulting in a town devastated by the deaths of 130, including many school children and the first loss of men of the newly established 18th (Service) Battalion Durham Light Infantry (DLI).

At the time of his enlistment, at the age of 21, John Ward was the manager of a family owned laundry business located next to St Aidan’s Church, Stockton Road, West Hartlepool. Along with other members of the Ward family, his father, Richard Mark Ward of Ashgrove House, Stockton Road, had been involved in a successful family building business which had included the construction of terraced houses on Stockton Road and the Sydenham Road area, as well as involvement in building projects for the Cameron brewing family. John Ward lived at 185 Stockton Road from 1918 until the mid 1930s.

Born 28 September 1893 in the registered district of West Hartlepool, John Ward had attended Silcoates School near Wakefield, excelling in football, cricket and boxing. In his early twenties he lost his first wife prematurely whilst she was giving birth to their first child whom sadly also died during the birth. He later married Dora Scotson on 21 June 1934. They had one child, Ann Ward, and soon after Ann was born the family moved to Eldon Grove, West Hartlepool where John lived until his death 18 March 1972.

Initially, because all four companies of the battalion had been completed, he was enlisted to one of the two Depot companies, although in November 1915, he was transferred to D company 18th (S) Battalion Durham Light Infantry (DLI), thereafter embarking the Empress of Britain from Liverpool to Egypt, December 1915 to defend the Suez from the Turkish. The two week passage to Egypt was noted for rough waters, overcrowded quarters, submarine torpedo attacks and a collision with a French troopship. The ship finally arrived Port Said, Egypt on 21 December 1915.

Prior to the campaign in Egypt, John Ward was billeted for basic training at Cocken Hall Durham. He then moved up to Ripon and Wensley for training exercises including route marching and night exercises. During this time, he was quickly promoted to lance corporal and then to corporal.

Also, during his training, he was transferred temporarily to 21st Battalion DLI, one of two reserve battalions created to feed in newly-trained soldiers to other battalions. In October 1915, John Ward was reprimanded for issuing weekend passes to men undeserving of a pass and for failing to carry out orders. Always remembered well for his kindness, this attribute along with experience and his age were perhaps shortcomings in tasks facing a young non-commissioned officer (NCO). According to his Statement of Services sheet, by his own request John Ward then reverted back to the rank of private and was transferred to D company 18th Battalion, DLI for the duration of the First World War, including theatre of war service in Egypt and Northern France.

By the end of 1916, following ten months of active engagement with 93rd Brigade, 31st Division, 18th DLI involving numerous attacks in the Battle of the Somme, including the devastation of his company within thirty minutes of its courageous but failed attack of Pendant Copse, Serre on 1 July, the first day of the Battle of the Somme, John Ward was recommended for a commission. In archived documents and war diaries, his commanding officer Lieutenant-Colonel WD Lowe detailed John Ward for a number of complex night raids within the Gommecourt area of the Somme.

After attending No. 5 Cadet Officer Battalion at Trinity College, Cambridge, John Ward was appointed to a temporary commission of Second Lieutenant Officer 18th Battalion, DLI and returned for duty in the Arleux Sector near Arras, May 1917. By the end of the year he became very ill, suffering from a fissure as a result of extensive trench service. After an operation and eight months recovery at Furness Auxiliary Hospital Harrogate, Second Lieutenant John Ward embarked for Bombay and the Punjab, Northwest India.

After being promoted to lieutenant whilst posted to 3rd DLI and attached to 2/91st Punjabis and seeing active service in the third Afghan War (1919), he finally relinquished his commission in October 1921 and returned to the family business in West Hartlepool.

His medal card confirms he was issued the 1914-15 Star Medal, The British War Medal, The Allied Victory Medal and the India General service Medal 1908-1935 (Afghanistan 1919).

Following the outbreak of the Second World War, John Ward enrolled in the local defence volunteers 18th (Independent) Battalion Home Guard, initially as Assistant Company Commander between May 1940 and December 1940. He was then promoted to Company Commander of the battalion until June 1941 when he was appointed major in charge of the battalion. For the duration of the war, the battalion was based at the old steel works, Hartlepool. He was finally discharged December 1945 and received the Defence Medal for his services.

He maintained a lasting respect and support of the DLI for the rest of his life.

19 October 1915
Wensley: Training. Reverts to ranks by own request

19 January 1916
Port Said: Discharged from Hospital returns to duties and unit in Kantara

Battle of the Somme
30 June 1916
Courcelles: 2045 Hrs D Company and 16th West Yorkshire Regiment moves up to assembly trenches Maitland then on to Front Line for night

1 July 1916
Serre Front Line: 0600 D Company line-up for attack on Serre; 0720 Hawthorn Ridge mine sprung alerting Germans of attack; 0730 D Company climbs out trench to attack. Germans unleash enormous fire power on trenches; Machine gun curtain of fire at advancing D Company; A few managed to reach Pendant Copse but never returned; Most fell in trench or on climbing out; Only 10 men of D Company survived; War Correspondent wrote ‘Heroism could go no further’; Battalion losses 474 and 12 officers from 789 of all ranks

5 July 1916
Serre Trenches:Relieved and moved up to Louvencourt; D Company reinforced by new drafts and NCOs of other companies

30 May 1917
Cambridge: Appointed to a temporary commission as Second Lieutenant DLI