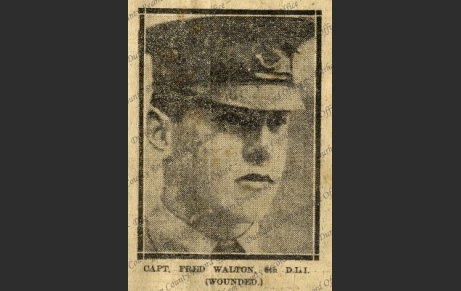 Frederick, also known as Fred, was born in Crook in the last few weeks of 1890 on 20 December. His parents, Thomas and Mary Walton, had married on 3 December 1884. Records suggest they had five children during their marriage but sadly one of their sons, Thomas, died as a child.

Following an education at Barnard Castle School, Frederick and his older brother, William, followed their father into the building trade. This was a successful business with the family living in a nine room house, The Willows on Commercial Street, and employing a servant at the time of the 1911 census.

In 1910 Frederick was serving as part of the 6th Battalion Durham Light Infantry (DLI) and was ranked as a second lieutenant on 2 April 1910. He was promoted to a lieutenant in the same battalion on 6 August 1913. Following the outbreak of war, Frederick continued to rise through the ranks, finally becoming acting lieutenant colonel in January 1918. In December 1918 he wrote a letter to Mrs Watson reporting his command of the 18th DLI. Mrs Watson was probably the wife of Colonel Watson who served alongside Fred.

Frederick was awarded the Military Cross (MC), reported in the London Gazette on 1 January 1918. Unfortunately there is no description of what this medal was awarded for. The local newspaper, the Auckland Chronicle, in January 1918 reports the “double honour” of Frederick being awarded the MC and his rapid promotion and gives the following description of him: “Modest and goodly to look upon, and every inch a soldier, his many friends anticipate for him a distinguished future.”

Frederick began his service abroad in France and Belgium on 19 April 1915 but was injured only a week later, during the battle of Ypres. A newspaper report suggests he was wounded in the leg. He did not return to serve in France till shortly after Christmas in 1915.

Whilst on leave in May 1916, Frederick presented a soldier who had been at the same school with a Distinguished Conduct Medal (DCM) in a ceremony in Crook. During this leave, on 9 May, Fred married Olive Richardson, the daughter of an architect originally from Stockton. A detailed description of the wedding was reported in the Auckland Chronicle (see supporting materials).

Only a few months after returning to France, during the battle of the Somme, on 17 August 1916, Frederick was again wounded. He was admitted to the Red Cross Hospital at Rouen suffering from a fractured shin bone. He returned to England on September 10. A local newspaper reported a few days before his return that “he was progressing well” at the hospital in Rouen. He did not return to service abroad until March 1917 as he was undergoing training, just as he had after his first injury. It seems that he had been earmarked for promotion early in the war, and was required to attend the necessary training courses at the staff colleges at Aldershot and Camberley during his recuperation.

When he was promoted to acting lieutenant colonel (26 January 1918) Fred was transferred to the 18th Battalion Manchester Regiment. According to Harry Moses’s account, he then took over command of 6th DLI on 23 April and seems to have commanded the battalion until it disbanded on 6 November 1918. A letter of December 2018 (see supporting materials) shows him in command of 18th DLI, although nostalgic for his former battalion. According to the battalion’s war diary Fred took command on the 18th on 22 October 1918.

According to his obituary in the Silver Bugle magazine, his most notable operation of the First World War was his command of the 6th Battalion at the Battle of the Aisne:

“…he, together with Colonel Philip Kirkup of 8th DLI, collected stragglers from many units and put up an heroic resistance, saving a situation which was almost hopeless and doubtless influenced the whole course of the War.”

In October 1918 Frederick wrote to Colonel Watson to propose some sort of memorial to remember those soldiers who had fallen. This appeal resulted in the acquisition of a set of 16 silver bugles inscribed with the names of the soldiers who had been lost whilst serving with the 6th battalion. Fred himself presented a silver horn, which was carried by the Bugle Major for many years. (Sliver Bugle magazine obituary, Spring 1970)

Frederick returned to Crook following his time in the army, remaining with the rank of lieutenant colonel in the Territorial Army Reserve. His name appears on electoral registers during the 1920s for Crook and Billy Row. He came back and took over the reins of the family building business, Walton Brothers. At the time of the 1939 Register, Frederick lived on Commercial Street in Crook, where he had spent his childhood. He was living with his wife, Olive, and was working as a building contractor.

During the Second World War, Frederick became Colonel Commandant of the 5th Durham Home Guard from 1 February 1941. His wife, Olive, was involved in the Women’s Voluntary Service.

Frederick and Olive’s only son, Henry Eland Walton, died on 10 July 1943 whilst serving as a captain with the 6th DLI. He died whilst serving as part of the Central Mediterrean Force on the first landing on Sicily. Henry is remembered on a stained glass window in St Catherine’s Church in Crook alongside a window that remembers Frederick’s older brother, William Henry. William was part of the Royal Army Service Corps and died on 19 October 1916.