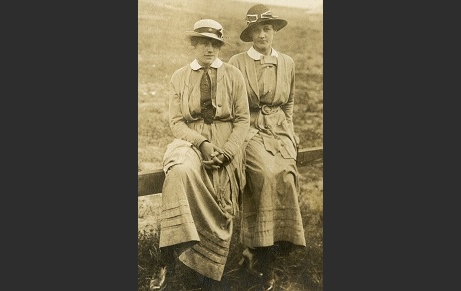 Photograph of Christine Tait and Ellinor Caldwell, nee Walton, taken in Etaples With many thanks to John Yuille Caldwell

Photograph of Christine Tait and Ellinor Caldwell, nee Walton, taken in Etaples With many thanks to John Yuille Caldwell

Ellinor was born in 1887, the second of four children of Thomas and Mary Walton who lived in Commercial Street, Crook. Thomas was a very successful building contractor and all of his children had a good education. Ellinor was sent away to boarding school (The Tower) in Saltburn-by-the-Sea, on the Yorkshire coast, and after showing much promise as a pianist went on to attend the Royal Conservatory of Music in Leipzig, graduating in July 1906.

Sometime after this she travelled to Seattle on the west coast of the USA to become governess to the two youngest sons of the Peabody family and later she voyaged to Honolulu, again as governess to the children of a Mr Whitfield on Diamond Point, another wealthy American family. There is no detail about her time in either of these places other than some lovely photographs of Hawaii that she took and developed herself. It is assumed that it was her sense of adventure and eagerness to travel that led her to apply for these positions as there was no need for her to earn a living.

Sometime before the outbreak of the First World War she returned to Crook, it is possible that with war clouds looming she was summoned home by her parents. In any event she travelled via Geneva to collect her younger sister, Elsie, who was at finishing school there, and they returned home together. In early 1915 the 17th Durham Voluntary Aid Detachment (VAD) Hospital at Etherley, Bishop Auckland commenced operation and Ellinor and her sister both volunteered as VAD nurses. These were unpaid posts as the volunteers had no formal training. Later in the war Ellinor volunteered to serve in France at the St John Ambulance Brigade base hospital at Etaples. It is known that she was at the hospital when it was bombed (twice) in May 1918 and moved to Trouville further up the French coast. This hospital closed in February 1919 so Ellinor will have returned home about this time.

On her return a family friend, Dr George Caldwell, was looking for someone to help look after his two children after the death of their mother. Ellinor took on this role, with much success, and in 1920 she and Dr Caldwell were married and went on to have two children of their own: Harry in 1921 and George in 1924.

The Walton family had their share of tragedy during the war years, in 1916 Ellinor’s elder brother, WH (Harry) Walton, died whilst on a troop ship in the Red Sea and was buried at sea. He is remembered on the war memorial at Basra, in the chapel at Barnard Castle School, on the Crook war memorial and by a stained glass window in St Catherine’s Church, Crook. In 1918 Ellinor’s mother, Mary, died at the age of 56, it is thought from Spanish Flu, she is also remembered by a stained glass window in Crook church. Ellinor’s younger brother, Frederick, rose to command the 6th Battalion of the Durham Light Infantry (DLI), in the rank of Lieutenant Colonel, and was involved at the Battle of the Aisne in 1918 when the battalion was almost annihilated during the German attack.

After Ellinor’s marriage in 1920 the Caldwell family moved to Uplands in Crook which had been bought by her father, Thomas, in 1916. After the death of his wife he was now living in the large house on his own so this move made practical sense. Her husband, Dr George Caldwell, died in 1946. The family continued to live here until the death of Thomas Walton in 1948, Ellinor then moved to Witton-le-Wear where she remained until her death in 1974.

(The story of the house ‘Uplands’ is also quite interesting. It had originally been called ‘Dortmund’ and had been built in 1910 for Paul Schwartz who had built up and then managed the Bankfoot Coke Works. At the outbreak of war Paul Schwartz and his family were interned as they were German nationals and also possibly because the coke works were of strategic importance. Thomas Walton’s building firm had not actually built the house but had done all the joinery work on the interior with much wood panelling, parquet flooring and ornately carved staircase. He had not been paid for this work at the time the Schwartz’s were interned so the only way that he could recoup the considerable outlay was to buy the house himself! So in 1916 the Walton family moved in and then, in 1920, the Caldwell family joined them. The Waltons had been great friends of the Schwartzs before the war, sharing musical evenings and an interest in motoring but afterwards they never met or were spoken of again.

Uplands was sold in 1948 to help pay considerable death duties and was turned into a hotel, it was finally demolished in 2003. Uplands Close and Caldwell Drive now occupy the site.)

The Great War Forum, thread on the bombing of the Saint John’s Ambulance hospital at Etaples:
https://www.greatwarforum.org/topic/67986-german-bombing-raid-on-etaples-hospital/

Photographs of nurses and soldiers at Etherley VAD Hospital