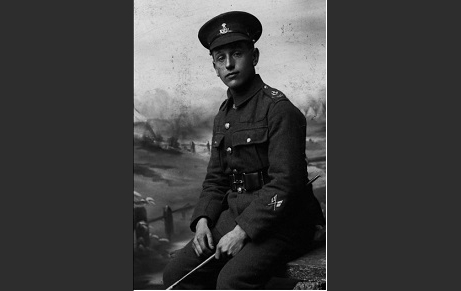 George Turner was the youngest son of Michael and Ann Turner, born a year before his father’s death in the Brancepeth mining accident of 1896. In the 1911 Census George is 16, a coal miner and living at 12 Belle Vue, Willington with his elder brother, Thomas William, a coal hewer.

George was an early volunteer for war service, enlisting on 5 September 1914. He was assigned as a Private 17126 in the 13th (Service) Battalion of the Durham Light Infantry (DLI). The 12th and 13th Battalions were sent to Bullswater Camp, near Pirbright in Surrey and accommodated in a camp of long lines of bell tents each holding 10-15 men on Watts Common. Initially there was a shortage of instructors and equipment. For a number of weeks, the men paraded in civilian clothes and training was limited to route marching, squad drill, physical training and entrenching. They were issued with temporary ‘Kitchener blue’ uniforms. [1]

George’s photograph shows that he was with a signals unit and the military background suggests that it was taken while he was in training.

In February 1915 he was disciplined while at Wokingham for failing to comply with an order.

His service in France began on 25 August 1915 when 13/DLI crossed to Boulogne from Folkstone by night with a single destroyer escort. [1]
In June 1916 he was again disciplined for using improper language to an non-commissioned officer (NCO). Nevertheless, the next month he was promoted to lance corporal. During his service in France he was severely reprimanded on two further occasions in 1917: for being absent from a working party and being late for a roll call. He seems to have been quite a character, which perhaps can be seen in his expression.

In October 1918 he was wounded in action with a gun shot wound to his right forearm. However, within a month he had re-joined his unit and was eventually discharged at York in January 1919. In 1925 he re-enlisted as a private in the 8th Durham Territorial Army. He died in Brandon in 1960.

[1] John Sheen “With Bayonets Fixed The 12th and 13th Battalions of the Durham Light Infantry in the Great War”, Pen and Sword, 2013