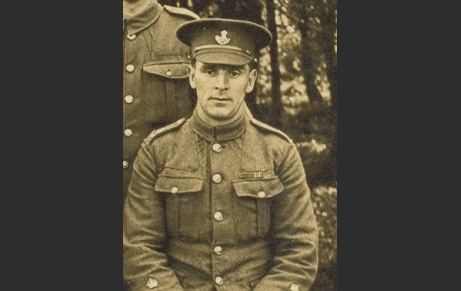 Photograph of Jack Robinson, detail of group photograph With many thanks to Jack Turton

Photograph of Jack Robinson, detail of group photograph With many thanks to Jack Turton

NCOs of 14th DLI gathered around a rum jar. Jack Robinson in the centre With many thanks to Jack Turton

Photograph of 14th DLI soldiers having fun, "In Civvies Once More". Jack Robinson is second from right With many thanks to Jack Turton

Photograph of members of "Kitchener's Army Gym Class", November 1914. Including Jack Robinson With many thanks to Jack Turton

Photograph of wounded soldiers at Ascot Hospital, including Jack Robinson With many thanks to Jack Turton

Durham Light Infantry bugle emblem and battle honours, embroidered by Jack Robinson whilst in Ascot Hospital With many thanks to Jack Turton

Jack Robinson was born on 23 June 1892, at 4, Factory Street, Darlaston, Staffordshire. The second child of Arthur and Harriet Robinson and the eldest son. Jack had four brothers and two sisters. Seeking work the family moved to the North East of England and West Hartlepool in 1896 where Arthur Robinson continued his trade as a blacksmith.

Something of a bully, Arthur Robinson would regularly beat his children, particularly his son Jack, to such a degree that the young Jack ran away from home and took up with a travelling fairground in the Trimdon area and eventually ended up living in the Spennymoor where he was given a roof over his head by a Mr Bland, a local cobbler. He learned the skills of a cobbler from Mr Bland and they served him well into his old age, repairing his own shoes. Arthur Robinson, searching for his eldest son, tracked him down and demanded he return home. Mindful of the abuse he had suffered, Mr Bland threatened Arthur with police involvement should he forcibly take his son back. Jack did not return to West Hartlepool with his father but completed his education under the guidance of the Spennymoor cobbler. Arthur Robinson returned to West Hartlepool and eventually left England for Canada, promising to find work and later send for his family. He never did, and his wife and remaining children stayed in West Hartlepool.

On leaving school, Jack found employment like so many of his peers at the time in the local coal mines and worked at East Hetton Colliery in Kelloe and at Thornley and Wheatley Hill Collieries in the Durham coalfield. Continuing his work in the mines Jack met and married a local girl, Martha Marr, from Quarrington Hill, County Durham, on 11 April 1914.

A little over three months after Jack and Martha married, war in Europe broke out and Lord Kitchener called for volunteers for his New Army. Jack answered the call and joined his county regiment, the Durham Light Infantry, enlisting in the 14th (Service) Battalion. Within weeks he would find himself at the other end of the country being trained for war.

Jack’s first taste of total war came on 25 September 1915, two weeks after arriving in France and being thrust into the Battle of Loos. There are two other notable events which can be highlighted and these involve the two gallantry awards of which Jack was a recipient. The Military Medal (MM), and the Distinguished Conduct Medal (DCM).

Awards of gallantry medals were listed in the London Gazette, a rule of thumb being that the award was listed three months after the action that determined it.

The Military Medal was gazetted in October 1916. Citations were not given for Military Medals but occasionally a War Diary may make mention of an action and the name of a soldier who was awarded the MM. Unfortunately this is not the case for Jack Robinson, but using the 3 month rule, this would place him somewhere in the Ypres Salient around July/August 1916.

Jack was awarded the Distinguished Conduct Medal during the attack on Rainbow and Shine Trenches in the battle of the Somme, October 1916. His citation reads as follows:

” For conspicuous gallantry in action. He led his company forward under heavy fire, displaying great courage and determination. Later he led a patrol and obtained most valuable information. He set a splendid example throughout”

At some point during the actions he took part in with his battalion, Jack sustained a severe wound to the rear of his right knee and ankle which was caused by shrapnel. Severe enough for surgeons to want to amputate, Jack refused to allow this and following restorative surgery and a period of rehabilitation at the Ascot Hospital, Jack returned to the front.

Jack Robinson would rise through the ranks to become a Company Sergeant Major or Warrant Officer Class II and would continue to see action at Arras, Lens and Cambrai before the 14th Battalion of the Durham Light Infantry were disbanded in France on the 31 January 1918. Jack then transferred to the Northumberland Fusiliers, although to which battalion remains unclear. He would remain with the Northumberland Fusiliers (Possibly the 52nd or 53rd battalions) and serve as part of the Army Of Occupation following the Armistice. By this time, Jack had attained the rank of Acting Regimental Sergeant Major. He was still serving as a soldier in April 1920.

War over, Jack returned to his wife Martha in Quarrington Hill and began the process of trying to get life back to normal after the horrors he had witnessed in France and Belgium. He took up employment once again in the coal industry which was the biggest employer in County Durham. Jack recommenced work at East Hetton Colliery, Kelloe, the village to which they would move and eventually make their home for the remainder of their married lives.

During the years of the Second World War, Jack served in the local Kelloe Home guard and Her Majesty’s Prison Service, at Wandsworth Prison and Durham Prison. It was during his service at Wandsworth he would sit in the condemned cell the night before his execution with John Amery who was convicted of treason and hanged on 19 December 1945. Amery was the first person to plead guilty and be executed for treason since 1654.

In the cell next door to Amery was William Joyce, better known as Lord Haw Haw and a little over two weeks later, on 3 January 1946 he too would take the walk to meet Albert Pierrepoint, Albert’s assistant, and the gallows. Joyce would be the second to last person to be executed in the United Kingdom for a crime other than murder. Jack would also watch over Joyce on a day to day basis.

In total Jack Robinson would serve the Prison Service for four years from 1943 to 1947. As stated this was split between Wandsworth and Durham. Upon leaving the service, Jack would spend the last 10 years of his working life back in the coal mining industry at East Hetton Colliery, Kelloe and would eventually retire on 23 June 1957, aged 65 years.

His latter years were spent enjoying the passion he held dear, gardening. A large allotment used to fill his days. He hand-built his own greenhouses, installed the heating systems that grew the tomatoes that he lovingly tended everyday and worked the soil throughout the seasons that kept vegetables a plenty on the table.

On a social level, Jack was a committee member of Kelloe Workingmen’s Club and enjoyed a pint with his Woodbines. It was in the club on 11 April 1964 that he and his wife celebrated 50 years of marriage. He also liked a small wager on the horses most days and took an interest in football both local and professional. In fact, the evening Jack passed away he was sitting in bed watching the highlights of an Under-23 International match between England and West Germany. 14 October 1970, aged 78 years.

CSM never expected him to survive