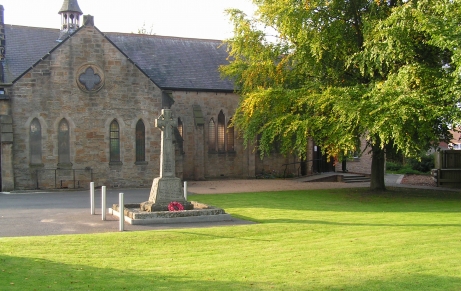 News of his death received on Armistice Day 1918. One of three brothers from the same County Durham family to die in the Great War.

On Armistice Day, 11 November 1918, tens of thousands of families across Britain mourned their sons who had died in the war. Some families had lost two, three, four, and even, incredibly, five sons in the fighting, like John and Margaret Smith from Barnard Castle, who lost five of their six boys. However, for one family in Durham, Armistice Day brought even more sadness. For on that day, John and Mary Elliott received news that their third – and last – son, James, had died in France.

John Thomas and Mary Elizabeth Elliott had married in Bishop Auckland in 1880 and over the next twenty years had ten children, eight of whom survived to adulthood. John had first worked as a coal miner and later as a foreman at the North Bitchburn Pipe Works. In his spare time, he played the organ in Witton le Wear parish church. In 1911, at the time of the census, John and Elizabeth were living in Howden le Wear with just three of their children, James, Olive and May. The other children, including Wilfred and Robert, had by then left home to start their own families. During the Great War, John and Mary ran the Neville’s Cross Hotel in Durham, but afterwards moved to a house in the North Bailey, Durham.

Wilfred was the first of their sons to die in the Great War. Born in 1880, Wilfred Elliott, after learning his trade as an engine smith, enlisted in the Royal Navy in September 1902 for twelve years and worked as an engine room artificer (fitter). When the war began, Wilfred volunteered to remain in the Navy. On 25 April 1916, 270779 Chief Engine Room Artificer 2nd Class Wilfred Elliott was serving on the submarine E22 in the North Sea off Great Yarmouth, when his boat was torpedoed by a German U-boat. Only two of the crew of thirty-three sailors survived and were taken prisoner. Wilfred Elliott, whose wife, Elsie, lived in Portsmouth, is commemorated on the Naval Memorial in the town. This memorial bears the names of 10,000 sailors lost at sea during the Great War.

Five months later in September 1916, John and Mary Elliott received news that their second son, Robert had been killed in action in France. Born in Sheffield in 1885, by the time of the 1911 census, Robert was living with his wife, Margaret, and two young children in Howden le Wear and working as a miner in a local colliery. It is not known when he joined the DLI but in April 1915 6/2738 Private Robert Henry Elliott sailed for France with the 6th Battalion DLI – a Territorial battalion with headquarters in Bishop Auckland. On the evening of 16 September 1916, 6 DLI joined the fighting on the Somme for the first time, when it attacked a strongly held German trench but was driven back with heavy casualties. Amongst the fallen was Robert Elliott. As his body was never recovered from the battlefield, Robert is commemorated on the Thiepval Memorial in France.

Then on 11 November 1918 – Armistice Day – John and Mary Elliott received the terrible news that their last son, James was dead. Born in 1888 in Witton le Wear, James was still living with his parents and working as a hewer in a local colliery at the time of the 1911 census. It is not known when he enlisted but on 27 August 1914, just weeks after the war had started, 9016 Private James Copeland Elliott left his young wife, Mary, in Bishop Auckland and sailed for France with the Royal Army Medical Corps. In late 1918, James was serving with the 75th Field Ambulance of the 25th Division. During October, gas shells and the worsening ‘flu epidemic caused many casualties in the Division. One of these casualties was James Elliott, who died on 3 November 1918 of gas poisoning in a Casualty Clearing Station at Busigny and was buried nearby. News of his death reached his parents in Durham on Armistice Day.

In October 1921, John and Mary Elliott attended the unveiling of a granite memorial cross to the war dead in St John’s churchyard, Neville’s Cross, Durham. The names of their three boys may still be seen there today.