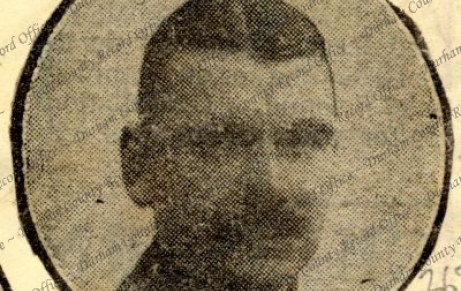 Joseph Thomas Monkhouse was born in Cowshill in 1885. He was the son of Octavius Monkhouse, a hotel and quarry owner, prize-winning sheep breeder, Justice of the Peace, Rural District and County councillor. Octavius was the son of Reverend George Monkhouse, who had been the vicar of Heathery Cleugh parish. Joseph’s mother was Mary Hannah Monkhouse nee Thompson, the daughter of Mary Holms, an inn-keeper in Cowshill.

By the time of the 1901 census Joseph had been sent away to school in London. The census records him as a pupil at Christ’s Hospital, Newgate Street in the City of London. Later on in that year the school would move to its present premises in Horsham, West Sussex. Ten years later, Joseph was recorded on the census with his parents at Cowshill. The census states that he was a quarry manager and it was likely that he was working at his father’s quarry in Oswestry by this point. It is possible that he was at home in Cowshill in April 1911 for his wedding to Bessie Vickers Marindale, as they were married in the April quarter of 1911. Bessie was born and brought up in Stanhope and attended Wolsingham Grammar School.

Before the war, Joseph had been a lieutenant with the Durham Light Infantry (DLI) Territorials. Very soon after war was declared he was promoted to temporary captain with the 6th Battalion DLI. His medal card shows that he disembarked in France on 19 April 1915 and headed to Ypres with the rest of the Battalion. Five days later 6th DLI engaged with the enemy for the first time during the war. In the thick of the fighting, Joseph was killed on 27 April 1915. He is commemorated on the Menin Gate Memorial, near Ypres.

In the July of that year, Octavius also lost his youngest son, Alfred Tatum Monkhouse. According to later newspaper reports, Alfred, aged just 17, was killed in a bicycling accident. He was buried at Saint Thomas Church, Heathery Cleugh, Cowshill, where his parents later erected a stained glass window dedicated to the memory of Joseph and Alfred.