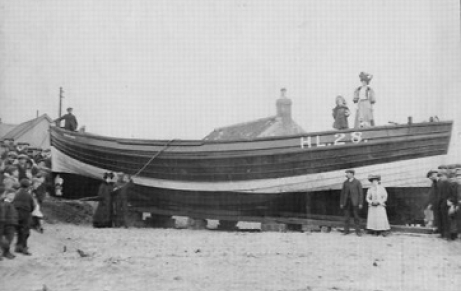 The launch of the Star of Hope 1908. Image courtesy of Hartlepool Borough Council

Ralph Cole was born in 1857, in the fishing village of Staithes, North Yorkshire. He was the youngest surviving son of Richard and Elizabeth Cole. He was fifty-seven when Britain declared war on Germany in 1914.

His father, Richard Cole, owned a fishing boat called the Star of Hope, a 35-foot mule which had a crew of three men and a boy, and was primarily designed for herring fishing. The Cole family would have fished for herring, using drift nets, for about six months of the year from May until the end of October. In the autumn and winter, they may have used the Star of Hope to fish with lines for white fish (cod, ling and coley). Alternatively, she may have been laid up until the spring with the family working a smaller coble (fishing boat), fishing inshore for white fish and crabs and lobsters.

In the 1880s the family lost control of the Star of Hope for some years. By this time Richard Cole Senior (born 1819) was in his early sixties and was probably semi-retired, spending most of his time ashore. His son, Richard Cole Junior, Ralph’s elder brother (born 1848), had taken over as skipper of the Star of Hope but, in 1887, the family were forced to sell or mortgage the Star of Hope. In August of that year the Star of Hope was re-registered as owned and skippered by Thomas Craike, another Staithes fisherman. This is probably because Richard Cole Senior had died in March 1887 and his wife had to raise some cash to pay off his debts of £144 and provide for her own future. Despite this set back, Ralph Cole was soon able to buy a share in the boat and he is registered as Craike’s partner and skipper of the Star of Hope in May 1889 and, within a few years, he probably owned her outright. This was the first of several set backs which Cole overcame during his working life. His brother, Richard Junior, continued to fish, working his own coble, but was drowned in October 1895 along with two other fishermen.

During these years Ralph Cole established himself as a well-known and respected member of the fishing community. He married Hannah Crooks, from another Staithes fishing family, in 1878 and they had seven children. He was a member of the Staithes lifeboat crew, which would have confirmed his standing within the village. Unlike some inshore fishermen from the villages on the North Yorkshire coast, Ralph chose not to lay-up the Star of Hope and work on the growing steam trawler fleets based at Hartlepool and Scarborough. Perhaps he valued his independence and believed, as some inshore fishermen did, that working on a trawler was beneath him. In 1895 his wife, Hannah, died, and he never remarried, relying on his daughters, Sarah (born 1879), Margaret (born 1881) and Isabella (born 1889), to keep house for himself and four sons.

At some point over the next five years Ralph and his family moved to West Hartlepool, where there were more opportunities for his sons to find work than at Staithes or Whitby. All four of his sons seem to have found work in the shipyards when they were old enough. Hartlepool’s booming fishing industry also promised a brighter future for Ralph; new harbour and dockside facilities had been provided by the North Eastern Railway Company and generally the local quayside market was more buoyant than at Whitby or Staithes where the fishing Industry was declining. There were also more opportunities in Hartlepool for work ashore during the winter, when a long spell of bad weather would have prevented the Star of Hope from getting to sea.

We do not know when the Star of Hope was built, but by the early years of the new century she was old fashioned and near the end of her working life. In 1908 Ralph Cole had a new herring mule built at Hartlepool, she was bigger than his old boat, 45 feet overall and weighed 22 tons, and was fitted with a motor. This new Star of Hope had cost nearly £300, but Cole’s total investment was probably nearer twice this amount, if we consider he would have had to buy additional nets and other fishing gear for her. The new Star of Hope was intended to ensure that Cole could continue to make a living from the summer herring fishery and give him more days at sea in the winter. The day of her launch was proud moment for him and the photograph shows the family, dressed in their Sunday best, standing still for the photographer.

The new boat was a financial disaster for Cole. The motor was unreliable, and he lost many days at sea during the 1908 herring season and, in May 1909, he declared himself bankrupt, with debts and legal bills amounting to about £400. The Star of Hope was seized by one of his creditors, Leonard Hodgson, the landlord of the Volunteer Arms, in Church Street, West Hartlepool. Hodgson had stood as guarantor for part of Cole’s debts in return for a charge on the boat. In 1911 he sold the Star of Hope to new owners at Whitby. Ralph Cole’s attempt to build a new, more competitive, Star of Hope was a failure and it is perhaps significant that she changed hands three times within the next eight years. If she could not pay her way in wartime, when quayside fish prices were high – by 1918 a five-fold increase had taken place compared with prices in 1914 – there was no hope for her.

Despite these difficulties Ralph Cole’s luck changed, and he became skipper of another herring mule, the Blessing, which was owned by his son-in-law, John R. Humphrey. The Blessing was built in Filey in 1907 and Humphrey had bought her second-hand in May 1909. Humphrey came from another Staithes family and had married Cole’s eldest daughter, Sarah, in 1901 and, after a spell working in a Middlesbrough Iron works, he bought a fish and chip shop in the town. He later sold the Middlesbrough shop and moved with his family to George Street, West Hartlepool, where he opened another fish and chip shop.

Undeterred by Ralph Cole’s earlier difficulties, Humphrey had a motor installed in the Blessing in 1911. Tragedy struck in August 1914, however, when Humphrey, on only his second trip in the Blessing, died in agony after aggravating an old internal injury following a severe bout of sea sickness. They had shot their herring nets twelve miles off Staithes and he became unwell on the night of Thursday 21 August. On the Friday morning the motor would not start and passing craft were hailed, but without success. The crew then decided to sail back to Hartlepool. Humphrey died at sea at 4am on the Saturday morning and the Blessing didn’t get back to Hartlepool until Saturday afternoon.

Sarah, Humphrey’s widow, inherited the Blessing and her father continued as skipper. For the next eighteen months, possibly with his sons Richard and Thomas Cole as crew, he continued to work the Blessing off the north east coast, which in wartime was an increasingly dangerous place. In the spring of 1916 Cole was working the Blessing from North Shields fishing for ‘spring herrings,’ which were small, immature fish that had always brought a good price and doubly so in wartime. The family had bought new white cotton nets for this fishing, because it was widely believed by fishermen that the herring could not see them in the cold clear water. On 28 April 1916 the Blessing was stopped and sunk off North Shields by the German submarine UB-27. Thankfully the crew of four, which included Cole and his sons Richard and Thomas, all survived. They were picked up after some anxious hours in the Blessing’s small boat. The Whitby Gazette reported that she was uninsured and ‘the loss is heavy as the nets were all new’.

In December 1916 Richard Cole, Ralph’s son, enlisted in the Royal Naval Reserve and was based at North Shields. In April 1917 he was serving on the Ruthin Castle, a new trawler chartered by the Admiralty for mine sweeping duties. On 20 April the Ruthin Castle was off Skinnigrove, not far from Staithes, a stretch of coast that he must have known well, when she hit a mine. Richard Cole was killed along with eight other members of the crew. His body was recovered and was buried in Hartlepool North cemetery. He left a wife, Ellen Cole, living in 5 Tennant Street, Hartlepool.

After the loss of the Blessing, Ralph Cole returned to the sea and found a berth because of his Staithes connections. In August 1917 he was employed on the Ada – a steam drifter recently bought by Captain Richard Thompson, of Staithes, from Helmsdale owners. Cole was employed as mate and a relative, William Cole (b 1849), was a deckhand. The Ada was originally built for James Hall and partners, of Sunderland. She had a wooden hull and was underpowered and, as a result, was not requisitioned by the Admiralty for war service. On her first trip from Whitby the crew had to haul the herring nets in very heavy weather. A rope broke and stuck Ralph and William Cole, hurling them both overboard. Wearing heavy sea boots and oilskins they had no chance of surviving and both men were drowned. The crew of the Ada were unable to recover their bodies.

The loss of four men at sea in three years seems to have finally cut the Cole family links with the sea. Thomas Cole had returned to work as a shipyard riveter and Sarah Humphrey sold the fish and chip shop in George Street and remarried. Ellen Cole, who had married Richard Cole in 1915 – perhaps hoping for a new life away from the drudgery of working as a general servant in a lodging house – remarried in the 1920s.