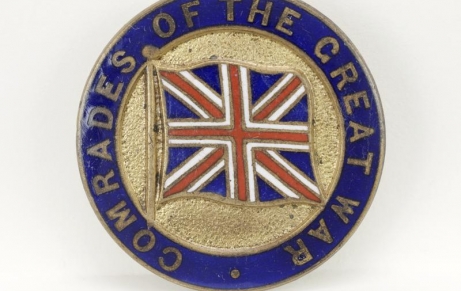 Badge of the Comrades of the Great War, Imperial War Museum © IWM (INS 5648)

The Comrades of the Great War

The Comrades of The Great War was a veterans’ organisation set up in 1917 as a non-political association to represent the rights of ex-service men and women of the First World War.

The founding of this Comrades organisation was sponsored and encouraged by politicians and industrialists as an alternative to existing servicemen’s groups, some of which appeared to be more politically active and therefore a cause for concern.

The National Union of ex-Servicemen (NUX), in particular, was regarded with suspicion since it was a socialist organisation and had close links with the Labour Party. By 1919 it was claiming a membership of 100,000. It had a number of objectives which were quite political, for example, the union called for the abolition of private property to fund projects for workers, better living conditions and better medical care for injured soldiers. The NUX was kept under surveillance by the Home Office because the government was afraid that the NUX might be plotting some kind of revolution. There is little evidence that this was the case.

Another group, The National Federation of Discharged Sailors and Soldiers (NFDSS) was led by Liberal party politicians and fielded candidates for elections to parliament, especially in the 1918 election. It had even put a candidate up against the Earl of Derby’s son in the Liverpool Abercrombie bye-election in 1917. Although the Federation’s candidate didn’t win, Lord Derby decided to establish a veterans’ club which would keep away from more political matters and be more conservative.

So the Comrades of the Great War organisation was formed. Because it had been set up with the support of politicians and military officers, the Comrades club did not appeal at first to ex-servicemen. Only when it was led by military men of experience did the club start to take off.
The Comrades raised funds through various activities, including town parades, as the Jarrow press article shows (see Related Materials below). It is significant that the Jarrow branch invited their local MP to open their new headquarters. This veterans’ group was clearly willing to work with politicians rather than challenge them, exactly what the founders had intended.

By 1921 however, it was decided to amalgamate the various groups into the British Legion which continues its valuable work today.

Letter regarding flag day for The Comrades of the Great War