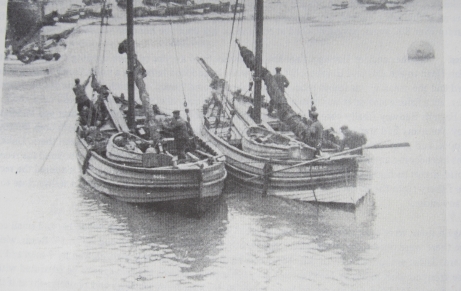 The Mules Noel and Faith at Scarborough With kind permission from the National Maritime Museum, Greenwich, London

The Hartlepool Bombardment: A forgotten victim

The destruction of the Wayside Flower HL4

The events of the morning of 16 December 1914, when Hartlepool was shelled by German warships, are well known: 127 people were killed, 400 wounded, many with horrific injuries, and there was widespread damage to property. Amidst this death and destruction, a large herring mule (fishing boat) called the Wayside Flower was destroyed.

Mules were designed primarily for herring fishing and were popular with fishermen at Hartlepool, Staithes, Whitby and Scarborough. They had the lines and form of a coble, but were built with a keel and had a round, instead of a transom, stern. Wayside Flower was large – forty-three feet long – with a maximum beam of twelve feet and weighting over 35 tons. This made the mules very different to the smaller cobles which were used in the line and shell fisheries; they were 22-27 feet long and weighed less than five tons and had a crew of three. She was probably half-decked, which provided some basic accommodation for the crew of five forward, and carried a small (calf) coble on board.

Mules had better all-round sailing qualities than the smaller cobles and were more able to cope with unsettled weather in the spring and autumn and could fish safely far out to sea. These qualities made it possible for their crews to compete with the Scottish herring drifters, which increasingly came to dominate the herring fishery off the north east coast. They fished for herring for six or seven months, from the beginning of April until the end of October or early November. Mules were usually laid up at the end of the herring season, but from the late 1890s, some crews chose to fish for cod, ling and coley during the winter.

Wayside Flower was built at Filey in 1910 for Charles Robinson of Scarborough, who worked her for five years and then sold her to a partnership of five fishermen from Hartlepool in January 1914. They were:

The Coulson’s and Horsley’s were established Hartlepool fishing families and four or five families pooling their resources to buy a boat was a proven way to invest in the fishing industry.

Her name, Wayside Flower, is taken from the second verse of the popular Victorian harvest hymn ‘We plough the fields and scatter.’ This verse speaks of the uncertainty of the fisherman’s calling and the hope that a higher power will watch over their efforts:

He only is the Maker
Of all things near and far;
He paints the wayside flower,
He lights the evening star;
The winds and waves obey him,
By Him the birds are fed;
Much more to us, His children,
He gives our daily bread.

The universal appeal of these sentiments may explain why her new owners chose not to re-name Wayside Flower when she was registered at Hartlepool.

Wayside Flower represented a significant investment for the partners and may have cost them several hundred pounds when they bought her. They also installed a motor, which would have cost them about £600 – a huge sum – which shows how determined they were, as the average income of an inshore fisherman at the time was only £70-100 a year. The motor would have used paraffin or Scottish shale oil and running costs would have been between six and nine pounds a week.

Like many fishermen of moderate means, Wayside Flower’s owners chose to install a motor so they could continue to make a living from the herring fishery. For, although they were not as prodigious earners as steam drifters, which by 1912 dominated the fishery, motor boats earned twice as much from herring fishing as sailing boats. In 1910 average earnings for the Scottish herring fleet were as follows: steam drifters £1,410, motor boats £955, sail £517.

The practical benefits to be had from installing a motor were demonstrated daily by the small number of Hartlepool fishing boats that had been converted by 1914 and by the growing number of Scottish motor boats that fished from the port during the spring and summer. A motor allowed the better management of a long train of herring nets than was possible with a sailing boat and a calm or contrary wind did not prevent motor boats from making the morning market. If the wind was favourable, the motor could be shut down and the boat would sail back to port. It follows from this that there was no need to pay tugs to tow the boats to and from the herring fishing grounds. In the winter motor boats got more days at sea than sailing boats.

We don’t know how Wayside Flower was lost, but during the bombardment, on 16 December 1914, three motor fishing boats which were at sea made for the shore and were beached at Hartlepool north of the promenade, near the Lifeboat House. In one of these boats, a fisherman had a broken leg. Men from the Durham Light Infantry were in trenches nearby and Sergeants Heal and Lindsey ran into the water to bring the man ashore – although shells were falling close. It is possible that Wayside Flower was one of these boats and was hit by a shell and destroyed, along with another motor boat, Constance.

We do not know if Wayside Flower was insured against war risks because who would have thought that she would be destroyed by enemy action? In any event, the loss of her and of the fishing gear she carried would have been a severe financial blow for the five families who owned her.