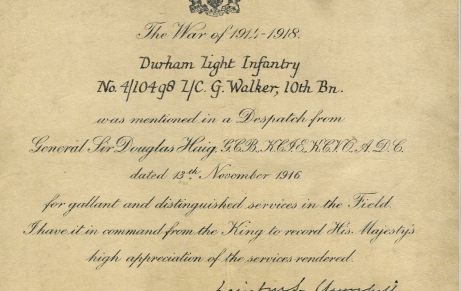 Little is known about George Walker, He was born in Wakefield and was married. He enlisted in the 10th Battalion Durham Light Infantry (DLI) at Durham and on 9 June 1915 he landed in France. On 13 November was mentioned in despatches. He was killed on 10 April 1917 at the Battle of Arras and is commemorated on the Arras Memorial and in the Durham Cathedral DLI Book of Remembrance.

I must write to tell you how terribly sorry I am that your husband Sergt. Walker was killed in action on the 10th. He was a splendid man – he was first through the wire – which was not cut – in front of the the German Trench and had done exceptionally gallant and good work. He was going over with a few men to take some Germans prisoners – who had held up their hands – when one of them treacherously picked up his rifle and shot him dead. Needless to say our men finished off the lot killing them all. But it does seem hard that such a brave man should have been killed in this mean and treacherous way. He had done splendid work and the officers with him were full of praise for him. As we hold the trench where he was killed you can rely on his having been decently buried by our men and at any rate he did not have a lingering death. He was always very popular in the Regiment and a fine boxer and we feel his loss very much – he was one of the Sergeants I knew best. I can only offer you my deepest sympathy in your great loss.