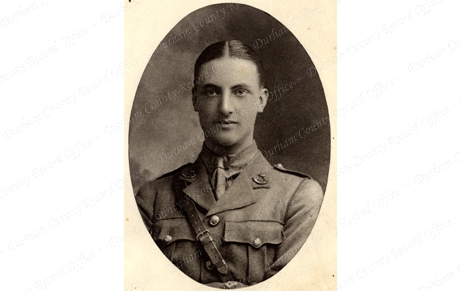 Son of the vicar of Brignall, officer with 10th Battalion, Durham Light Infantry

Gerald Evelyn Shuldham Sewart was born in Low Moor, West Yorkshire, on 23 August 1893, to Anthony Wilkinson and Margaret Evelyn Sewart. His mother died three days later, on 26 August. His father was a vicar, and by 1900 was based in Knaresborough, North Yorkshire. Here he met and married Constance Annie Ormsby, and in 1903 a half-sister to Gerald was born, Mollie Wilkinson Sewart.

In 1907, the family moved to Rokeby, then in Yorkshire, now in County Durham, where Anthony became rector. Then in 1910, they moved to nearby Brignall, the following year, Anthony was inducted as the vicar. During this time, Gerald studied at Giggleswick School, and in 1912, entered Balliol College, Oxford, to study maths. He excelled, receiving two exhibitions (a type of scholarship), and was on several different rowing teams. Gerald graduated in 1914 with a first class in Mathematical Moderations.

On 28 August 1914, Gerald received a temporary commission to second lieutenant with 10th Battalion, Durham Light Infantry (10 DLI). After a period of training, he went out to France with the battalion, in May 1915. Unfortunately, he was soon back in England on convalescence, having been wounded in June when a shell exploded about a foot above his head, and was suffering from shock. During this period of convalescence, Gerald was a musketry instructor at Ripon.

Gerald rejoined 10 DLI in early 1916. In the May, the battalion was stationed at Agny, France. The Balliol College Roll of Honour gives the following account:
‘On May 8 [Gerald] was in the trenches near Arras giving instructions to the men in charge of a Stokes Mortar which had just fired one round, and he stayed with the lance-corporal who was cleaning the gun when the Germans fired two rounds in retaliation. Evidently he saw the bombs coming and pushed the man into the small gun-emplacement, remaining outside himself, and thus sacrificing his life to save another’s. One of the bombs struck him on his steel helmet, killing him instantly.’

He is buried at Agny Military Cemetery.

A report appeared in the Teesdale Mercury on 17 May 1916, saying that Reverend Anthony Sewart had received notice of his son’s death. It reports that the Colonel [Morant] wrote: I considered him one of my finest subalterns and thoroughly reliable and very keen. He was an excellent instructor and his value as an officer was great.’ A service was held at Rokeby Church.

After the war, another article appears in the Teesdale Mercury on 2 March 1920, and reports on the unveiling of a war memorial in the grounds of Brignall Church, ‘A runic cross, with crusader’s sword, has been erected in the graveyard of the hamlet, perpetuating the memory of Gerald Evelyn Shuldham Sewart, John Thomas Bainbridge, Frank Errington, Innes kirk, and Charles Ward.’

Kindly Offer of Assistance in Tracing Missing Relatives or Friends