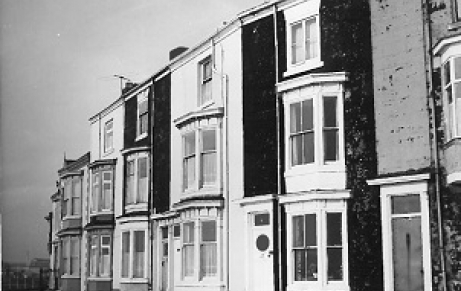 Photograph of York Place, Hartlepool, where the Stewarts lived for nearly twenty years Thanks to Hartlepool Libraries and the Douglass Ferriday Collection

In 1914 Mary Stewart was fifty-five years old and her husband Robert was fifty-two. Over the previous twenty years they had built up a family business trading as fish merchants and fish curers, based at the fish quay at Hartlepool. Fish merchants bought fish at the daily quayside auction and sold it on at a small margin, counting on quick returns. They bought with an eye on the railway timetables, consigning fish inland as well as selling locally. Their premises were rudimentary, at most a yard with a shed and some office accommodation. Curing went hand in hand with this, fish not sold one day could be smoked and sold over the next few days. They probably also took contracts from inland merchants to supply them with smoked haddocks, for which the Edwardians had an endless appetite. In the spring and summer, when large quantities of herring were landed at Hartlepool, they probably sold fresh herring and produced kippers and bloaters. Their son, Hunter Stewart, and William and Frank Hastings – two of Mary’s sons from her first marriage to William Hastings – worked in the family business alongside Robert and Mary.

The Stewarts had recently moved around the corner from Sussex Street, where Mary had lived from the late 1880s, to 6 York Place, which had both fresh air and sea views. Before modern weather forecasts, a sea view was a business asset for a fish merchant, as it was important to know when the local boats were likely to get ‘off’ to fish. As a former fisherman, Robert would have had a good eye for this. In addition to Hunter and William, Robert and Mary’s two daughters, Miriam and Jeanie, lived at York Place. In 1911 they had had two live-in servants (Alvena Knight, who had been with them for ten years and Mary Alice Clithero). Most of their neighbours got their living from the sea and York Place was home to three pilots, a fisherman and a marine engineer. Frank Hastings had married in 1909 and in 1911 was living in Arch Street with his wife and infant son.

Born in Hartlepool in 1859, Mary was the daughter of Thomas and Mary Jane Horsley. Her father was a fisherman and her mother would have been responsible for helping to mend nets, gathering bait and baiting her husband’s lines, as well as keeping house. This was an exhausting life but one which Mary would expect to share in her father’s house and take on herself once she married. In March 1878 Mary married William Hastings, a fisherman, and their only daughter, Catherine, was born in 1879 and died in infancy.

William Hastings senior owned his own coble [flat-bottomed fishing boat] – “Catherine” – and in 1882 he bought a second-hand keel boat in partnership with his brother Frank. The “Williams” was a large decked boat, with a crew of five, similar in many respects to the black sheds that can been seen on the foreshore of Holy Island today. Designed for herring and long-line fishing, the Williams would have been capable of fishing for herring between Berwick upon Tweed and Filey and probably cost between £170 – £200, a considerable investment for the two brothers. Frank died at the end of 1883 and William either inherited or bought his share in the Williams. James and John Graham bought the Williams in 1889 when William bought a larger Berwick keelboat, the “Dewdrop”.

Death struck again in March 1890 when William Hastings died of pneumonia, aged 42, leaving Mary widowed with five children to feed. It was not unknown for a widow to own a fishing boat and she seems to have formed a partnership with J. A. Holman, a marine fitter, to work it. At the end of the year, she sold William’s coble to new owners in Whitby. Mary established herself as a fish saleswoman, selling the Dewdrop’s catch on the quay, which allowed her to keep a tight rein on the boat’s finances. In a world where men controlled business, these years must have been tough, especially as she had had little formal education and her youngest son, Robert, died in 1892.

On 5th December 1910, at the opening ceremony for Hartlepool’s new fish quay in Victoria Dock, Councillor J.T Graham, speaking on behalf of the Council and on behalf of Hartlepool’s largest firm of trawler owners, paid tribute to the large number of Scottish boats which came to the port. A fine fleet of Scottish line boats came every spring to fish for cod and ling and, he might have added, they stayed to fish for herring in the summer and autumn. In the audience that day was Robert Stewart, who almost certainly had come south on one of these boats in the 1890s. He was born in Ferryden, near Montrose, in 1861 and was the son of Hunter Stewart, a fisherman, and his wife Jean. He married Mary Jane Hastings, in Edinburgh, in September 1895, according to the forms of the Free Church of Scotland.

In December 1895 Robert Stewart took delivery of a new Hartlepool-built coble, the appropriately named “Mary Jane”, but he seems to have left the sea in 1897 when she was sold. Three years later the ageing Dewdrop was laid up and the Stewarts appear to have concentrated on their fish merchant and curing business. Then, in 1914, they took a momentous step and bought a new steam trawler, the “Miriam Stewart”, named after their eldest daughter. The Miriam Stewart was launched in March 1914 at Hall Russell’s yard in Aberdeen and was described as having ‘the most modern fittings.’ Leaving the ways simultaneously was the ill-fated “Doris Burton”, which vanished without trace in November 1914. The Stewarts’ second trawler, the “Jeanie Stewart”, named after their youngest daughter and built by the same yard, followed in 1916.

Together the two trawlers would have cost the Stewarts £12-13,000 – a huge sum for a family business to raise, especially as no evidence has survived of the Stewarts selling shares in the new boats, although they may have had an arrangement with R. H. Davidson, a Hartlepool fish salesman and trawler owner, when they bought their first trawler. The Miriam Stewart fished for about five months before she was requisitioned by the Admiralty and converted to a minesweeper. The Jeanie Stewart was requisitioned almost as soon as she was completed and was also converted to a minesweeper. The little evidence we have suggests that their charter income from the Admiralty would have compared favourably with pre-war earnings from fishing.

Wartime trading conditions proved to be challenging for the family business. The requisition of most of Hartlepool’s trawlers and drifters, together with the U-boat threat, the conscription of crews for naval duties and the closure of some fishing grounds, meant that fish landings at Hartlepool collapsed. Based on national figures, white fish landings probably fell three-fold from an average (in the previous five years) of 85,000 hundredweights a year to about 28,000 during the war years. Herring landings were very poor in 1915 and 1918 compared with pre-war figures and overall wartime landings were down by a third compared with pre-war levels: from an average of 97,000 hundredweights to about 72,000 hundredweights a year. The reduction in the quantity of fish landed, coupled with general food shortages, forced fish prices up. Quayside prices rose steeply throughout the war and, by 1918, a five-fold increase had taken place compared with prices in 1914. The Food Controller didn’t introduce price controls for fish until 1918. This continuing combination of short supply and high prices probably lay behind the Stewarts’ decision to buy fish from further afield and Robert Stewart was a frequent buyer at Montrose fish market throughout the war, where his local contacts would have been helpful.

The Stewarts’ two trawlers were released from admiralty service in the spring of 1919 and fished for a few months until they were sold in September 1919 to new owners in Scarborough. We don’t know why the trawlers were sold but post-war trading conditions didn’t bode well for the future and boats under ten years old were in demand to replace wartime losses. Perhaps there is a simpler explanation – after a lifetime of hard work retirement may have beckoned.

All five of Mary Stewart’s sons survived the war and we know that Hunter served in the Royal Garrison Artillery. Sadly, her eldest son, Mathew, died in 1924 aged forty-three. Mary and Robert Stewart retired in about 1925 and moved to Seaton Carew. She died suddenly in July 1926 at Montrose while on a motoring holiday with Robert. After Mary’s death, Robert moved back to Ferryden and married again. He died at Ferryden in 1934. The family business Mary founded continued to trade as Hunter and Stewart and was managed by two of Mary’s sons.

I (and my siblings) have found this story fascinating. Mary Jane Stewart was my great grandmother and her daughter Miriam was my granny. As children granny often told stories about Mary Jane owning fishing boats in Hartlepool and how she met Robert Stewart but this detailed account has filled in many gaps. I’m just sad that I only found it recently as my mum (Mary Jane’s granddaughter) would love to have seen it. Was it written by another family member? Thanks
Sarah Bevan-Baker