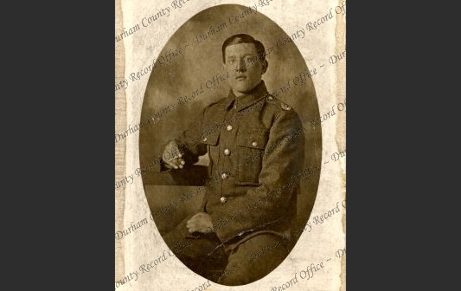 Alfred Beckwith was born in 1895 and at the age of about 16 he was working as a pony driver for the coal mine. Then he was able to join the 8th Battalion of Durham Light Infantry. At an unknown date, he was promoted to a corporal. In a short period of time, he was promoted again to a Sergeant in the battle of Somme. He received a Distinguished Conduct Medal for great gallantry and ability when many NCOs died, as well as a Military Award. He commanded the troop with great coolness and assisted in extracting the wounded under heavy machine gun and shell fire from within 70 yards. He died on the 5th of November, 1916, the worst day for military casualties in the Durham Light Infantry regiment in the First World War. He died in battle, his body assumed to be blown apart due to heavy shell fire.

Added by Durham County Record Office:
On 29 June 2017 twelve students from North Durham Academy visited the Record Office to explore the archives and research the stories of three soldiers from Stanley. A week later one of the Durham at War project staff joined the students in school and helped them to add their stories to the website, pin the stories to the interactive mapping and learn about WordPress web software.

The students who worked on Sergeant Beckwith’s story discovered that there were no surviving army service records for this man, but there was a citation for a gallantry award. He was killed during the Battle of the Somme at the Butte de Warlencourt, on a day when almost 150 men from the 8th Battalion were killed or wounded.