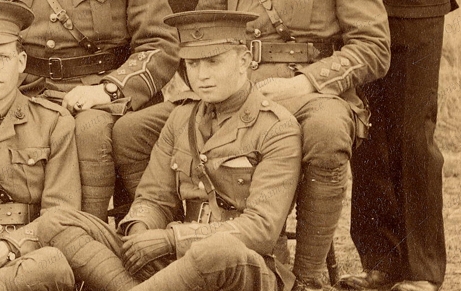 Philip Kirkup was born in Cornsay, Lanchester on 26 September 1893 to Philip Kirkup, a mining engineer, and his wife Mary Ann. He had a brother and a sister and they lived in Leafield, Birtley, Durham. Philip was educated at Marlborough College, where he joined the Officers’ Training Corps. In 1911, he was a mining student in Birtley and he became a colliery manager some time before 1914.

On 18 November 1912, he was commissioned as a 2nd lieutenant in the Territorial Forces with the 8th Battalion of the Durham Light Infantry. In May 1914 he was promoted to lieutenant and, according to the Chester-le-Street Chronicle, at the outbreak of war he was ‘one of the first territorials to volunteer for Foreign Service’ in his area. He landed with the 8th Battalion in France on 20 April 1915. Soon after, they took part in the Second Battle of Ypres, when many were taken prisoner, including his friend, Angus Leybourne, who went on to marry Philip’s sister, Constance. In June 1915 he was appointed temporary captain and the battalion saw action again on the Somme in 1916 when Philip was awarded the Military Cross. He fought at Arras and Passchendaele in 1917, and again at the Somme and in Battles of Lys in April 1918. In 1917 he was presented with an award by the Birtley Heroes Committee for his bravery and service during the war. In September 1918 he was awarded both the Distinguished Service Order and a Bar while acting lieutenant colonel in command of the 8th Battalion Durham Light Infantry and then the 7th Battalion Border Regiment, when he was mentioned in despatches. In 1920 he was awarded the Territorial Decoration and in April 1921 was appointed temporary captain in the territorials. He married Kathleen Scott at Brompton Church in Chelsea on 9 June 1925 and in the following years they had a son and three daughters, all born in the Lanchester area where Philip carried on his profession as a mining engineer.

Philip was appointed an Officer of the Order of the British Empire in the 1938 New Year’s Honours and, on 25 August 1939, he was posted to the 70th Brigade of the British Expeditionary Force (BEF). He commanded the 70th during the retreat to Dunkirk in 1940 when he was mentioned in despatches. He then commanded the brigade in Iceland and acted as Force Commander while General Curtis was on leave. He relinquished command on 24 July 1942 and in November was appointed Deputy Lieutenant of Durham. Philip then served in North Africa as an honorary brigadier and was again mentioned in despatches, before finally returning home in 1943 to take up a post in the Ministry of Fuel and Power. He was declared a supernumerary to establishment as colonel (honorary brigadier) in April 1945 and retired in September 1950, retaining the honorary rank of brigadier. From July 1951 to June 1956 he was honorary colonel of the 8th Battalion and he died in Chester-le-Street Hospital on 9 June 1959.

The award of the Distinguished Service Order (DSO) was gazetted on 16 September 1918 and the citation reads:

“For conspicuous gallantry and devotion to duty. While in command of his Battalion – holding two bridgeheads, was attacked six times by the enemy in mass. It was due to his courage, tireless energy and initiative in organising counter-attacks in the face of enormously superior numbers that time was allowed for reserves to come up and prevent a break in the line”.

The award of the Bar to the DSO was gazetted on 24 September 1918 and the citation reads:

“For conspicuous gallantry and devotion to duty. On the night before a battle opened this officer was sent to the Field Ambulance with a temperature of 103 degrees, but on hearing the barrage he left and attempted to rejoin his unit, which was impossible, so he collected all the men he could and organised a defensive position, which he held on to as long as possible. During the next two days he several times assisted in rallying men and holding up the enemy advance, and when ammunition had almost run out, he rode back and brought up small arms ammunition, riding practically into the front line with it. Throughout the whole period he did much to organise stragglers and keep them in the fighting line, being without sleep, and having little food for five days.”

Philip was the brother of Constance ‘Connie’ Kirkup, and a friend of Ernest Angus Leybourne. It is through this friendship that Constance began writing to Angus whilst he was a prisoner of war, and subsequently interned in Switzerland, where Connie visited him. They went on to get married in 1918.

Without Sleep for Five Days