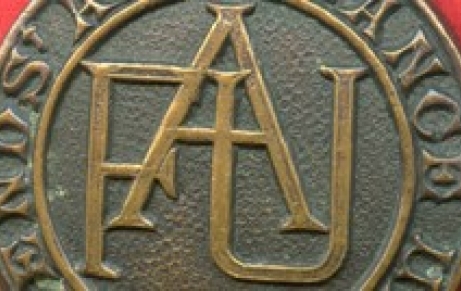 The Friends’ Ambulance Unit (FAU) was a volunteer ambulance service founded in 1914 by members of the British Religious Society of Friends, known as the Quakers. In line with the Quaker Peace Testimony, members of the Friends actively opposed war and violence. During the First World War, the FAU was a way for conscientious objectors to help the victims of war. The Friends’ Ambulance Unit first report of April 1915 illustrates the motivation for the organisation’s founding:

“The Friends’ Ambulance Unit originated partly in a need and partly in a desire. The need for all the help available in or near the battlefield – in spite of the existence of a military medical service attached to modern armies – became evident at an early stage of the war. The desire to be of service in a time of exceptional difficulty naturally arose in the minds of many of the young men of the Society of Friends, who by their religious principles were deterred from enlisting in the army.”

While some Quakers got involved with fundraising, the FAU was made up of those younger elements who wished to get involved more directly. Under the leadership of Philip J. Baker, a Fellow of King’s College Cambridge, an Ambulance Corps was formed which soon became the FAU. A speech of May 1915 by Baker refers to the diversity of backgrounds amongst those volunteers in the FAU: ‘Professional men, skilled artificers, craftsmen of all sorts, business men, practical workmen, engineers, mechanics and builders, surgical dressers, bearers, orderlies, motorists—all are at hand, and ready and willing to be of service’. These men were united by their moral objection to war. This was in the days before conscription had been introduced, so the willingness of the FAU’s volunteers to make a positive contribution in dangerous circumstances shows their profound commitment to pacifism. Members of influential Quaker business families such as the Rowntrees and Cadburys were involved in the organisation.

A training camp was established in the village of Jordans in Buckinghamshire, noted for its Quaker population. Sixty men attended the camp and were trained in first aid, stretcher drill, camp cookery, sanitation, and home nursing. On the 30th of October, forty of those men left for Dunkirk accompanied by three doctors and eight ambulances along with medical supplies. The organisation set up its headquarters at Malo les Bains and its volunteers served at First Aid stations and Casualty Clearing Stations near the front line. The organisation’s early work in France involved looking after wounded soldiers in makeshift military evacuation sheds until they could be evacuated on hospital ships. The Unit was under the jurisdiction of the British Red Cross Society, who fully authorised and supported it. As well as their front line work in France, the FAU was also active in allied occupied Belgium performing civilian relief work. The FAU saw the Franco-Belgian lines as those most demanding a medical response. All the while other large bands of men were being trained back in England to join the FAU. The FAU’s first report of April 1915 gives insight into what was achieved by the organisation. The report records:

Civilian and soldier patients were ferried by FAU members to hospitals in and around Dunkirk that they established largely to deal with the typhoid epidemic of 1914. These included St. Pierre Hospital, Sacre Coeur Hospital, Hospital Elizabeth and Queen Alexandra Hospital. The FAU also attended to out-patients in villages at the front, and were involved in a wider relief effort in giving clothing and food. A motor-kitchen was donated to the FAU by a friend and used to feed refugees. The FAU played a role in milk distribution, offering relief to infants affected by the war.
By the end of 1915 the FAU was running its own ambulance train and over the next year the organisation was to take over the running of a further three. These trains transported the injured from the front to a base hospital, and if needs be from the base hospital to a hospital ship back home. By 1916, the FAU operated two hospital ships.

The FAU was divided into a Foreign Service and a Home Service. The former dealt with France and Belgium as detailed above, while the latter was involved in the setting up and running of several hospitals in England. Two of these were in Quaker premises – one was in part of the Rowntree factory in York, and the other in a Cadbury owned house in Birmingham.

The organisation grew very rapidly. On 1 November 1914 there were 43 members of the FAU serving in France and Belgium. By 1 November 1918 there were 640. This was in addition to the 720 men working in Britain on behalf of the organisation. The introduction of conscription in Britain in 1916 will have played a large role in this, providing a sudden influx of conscientious objectors. The FAU quickly expanded and many non-Quakers joined. 16,000 conscientious objectors refused to fight when conscription laws were introduced. Those who objected on conscientious grounds had to appeal to military tribunals where their claims of moral or religious opposition were tested. Some of those granted ‘conditional exemption’ were required to join the Friends’ Ambulance Unit.

Over 20 died while serving with the Unit and nearly 20 died after leaving it, presumably because they decided to join the army to fight. Lawrence Rowntree and Colin Rowntree, for example, joined the Royal Engineers. After the armistice in 1918, the FAU continued to work for another year helping mainly with civilian relief and the repatriation of injured soldiers. The FAU was ended in 1919, but Quakers revived the organisation in the Second World War.