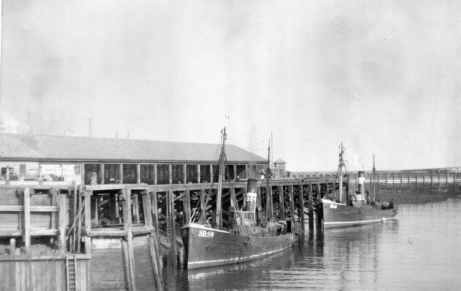 Fish Jetty at South Docks, Sunderland, with Pauline SD6 and Gloria SD54 alongside, 1905 with many thanks to Sunderland Museum and Winter Gardens

At the beginning of the war Sunderland had a small fleet of nine steam trawlers. Five were owned by two small companies: The Wear Steam Fishing Company Limited and the Vedra Steaming Fishing Company Limited. Three Sunderland businessmen were the principle shareholders: W. S. Dawson of Dawson and Usher, rope makers; Paul Wayman, a coal merchant; and James Hall, a fish salesman. Hall owned the other four trawlers and a motor fishing boat.

Determined and ambitious, Hall was the driving force behind this fleet of modern steam trawlers, which replaced the old paddle trawlers that had supplied Sunderland with most of its fish until the late 1890s. Born in South Shields in 1861, the son of a grocer, Hall’s early working life was spent as a clerk. He came to Sunderland in 1887 and married Eleanor Lindsay, the daughter of Robert Lindsay, a pilot and fish salesman. He began trading on the fish jetty at Sunderland as a fish salesman in 1887, in partnership with his father-in-law. By 1892 Hall was the owner of the ageing paddle trawler Cambria which he sold five years later.

Hall believed that modern steam fishing boats properly managed and landing their catches at Sunderland could give a good return to investors. In partnership with Sanderson and Wayman he formed the Wear Steam Fishing Co. Limited in 1898 and by the summer of 1899 the company had three new steam trawlers fishing from Sunderland. Later the same year he established the Vedra Steam Trawling Co. Limited, which had two new steam trawlers built. These were state of the art vessels, with electric lighting throughout and modern double barrelled steam winches. Hall claimed to have £35,000 invested in the two companies.

In 1900 he founded a third company, North Steam Herring Fisheries Limited, probably in partnership with J.S Doeg, a trawler owner based at North Shields and Aberdeen. They had six steam herring drifters built by the summer of 1901, which were designed to catch herring in the spring and summer and fish with long lines in the winter. They were not successful and were sold between 1904 and 1906.

In 1906 Hall established The Sunderland Ice Company Limited to import and store natural ice from Norway for use on the fish market and by his trawlers at sea. He also bought and sold second hand steam trawlers on his own account, keeping them fishing until a buyer could be found. Thus, by 1914 his fleet was a mix of modern trawlers of different designs and ages:

No mean achievement for a grocer’s son from South Shields, but the war put his life’s work at risk. When war was declared the Admiralty’s first reaction was to instruct Harbour Masters that fishing boats were not to proceed to sea and returning boats were to be confined to port. It was assumed that commercial fishing would be suspended for the duration of hostilities as the Admiralty had neither the resources nor the inclination to protect fishing vessels. There may also have been the belief that fishing boats would get in the way in the decisive sea battle that surely was to come.

Before 1914, Admiralty planners had recognised that the towing qualities of steam trawlers would be invaluable for minesweeping and, in 1911, a voluntary scheme was agreed with some owners whereby a special trawler reserve was created which could be hired in the event of war. In August 1914, 146 trawlers and their crews from the main east coast fishing ports, were mobilised. The need to continue fishing operations or the extent to which many more fishing boats of all types would be needed as auxiliaries was not foreseen. A long-term fishing ban was untenable and intensive lobbying led by the Board of Agriculture and Fisheries eventually overcame the Admiralty’s opposition. A complicated system of individual fishing permits was slowly developed, controlling where fishing boats could fish.

At first, the war probably went well for Hall and his partners, as the reduction in the quantity of fish landed, coupled with general food shortages forced fish prices up. Quayside prices rose steeply throughout the war and by 1918 a five-fold increase had taken place compared with prices in 1914. The Food Controller didn’t introduce price controls for fish until 1918. In 1914 it was clearly in Hall’s interest to keep his trawlers fishing despite the increased risk. 1915 began badly and, in January, his steam trawler Gloria was captured and sunk by U-17 55 miles east of Aberdeen, fortunately all the crew survived. In June, Gazehound and Curlew were sunk by gunfire from U-19 off Peterhead on the same day with both crews surviving. U-19 went on to sink another three trawlers that day and two more the following day.

These losses probably led Hall and his partners to re-think their position and they sold three of their surviving six trawlers to Grimsby owners that year: Minerva, Petrel and Lord Chancellor. Only Minerva survived the war and eventually returned to Sunderland. Petrel was captured by U-77 in March 1917 and sunk 120 miles east of Aberdeen and Lord Chancellor was sunk off Holy Island by another U-boat. Finally, Hall sold Pioneer, the 42-foot motor fishing boat which he’d bought in 1913, to a Grimsby owner. It is reasonable to speculate that as trawler losses mounted – 156 trawlers were lost nationally to submarines alone in 1916 – second-hand trawlers held their value.

Hall continued to trade as a fish salesman on the fish jetty at Sunderland throughout the war. As there were fewer restrictions on inshore fishing, the rise in fish prices was a boon for Sunderland’s inshore fishermen as this sector of the industry had been declining before the war. Unlikely to be attacked by the enemy, the old dangers remained however and, in 1915, a fishing coble capsized inside the South Entrance. Two of the crew of three drowned in sight of the fish market. Both men were married.

In 1916 and 1917 Hall’s remaining three trawlers: Pauline, Doreen and Andromeda were requisitioned by the Admiralty, fortunately all three survived the war and were returned in 1919 and 1920. The little evidence we have suggests that their charter income from the Admiralty would have compared favourably with their pre-war income from fishing. This much-reduced fleet resumed fishing operations at Sunderland. In peace, as in war, fishing remained a very dangerous job and in August 1921 Doreen was lost. She was cut in two by the SS Wyncote in fog a few miles east of Sunderland. Five of her crew of eight were lost, either killed by the collision or drowned, and the survivors were put ashore at South Shields.

James and Eleanor Hall didn’t have any children and were spared the anxiety of seeing a son sent to the front or a daughter move away to do war work, but their lives were blighted by Eleanor’s epilepsy. She suffered recurring attacks from her late twenties and in 1900 was admitted to Sunderland Borough Asylum. She was discharged that year but was re-admitted later and died there in 1922. James remarried and outlived his second wife.

Post war-trading conditions were difficult for companies like Halls’ whose trawlers were limited to the North Sea where catches were falling. The 1920s and 1930s were not a good time to raise capital in Sunderland to buy new trawlers, forcing him to replace wartime losses with second hand boats. By 1931 he had six trawlers fishing from Sunderland employing 50 men and had his own ice plant producing 30 tons a day.