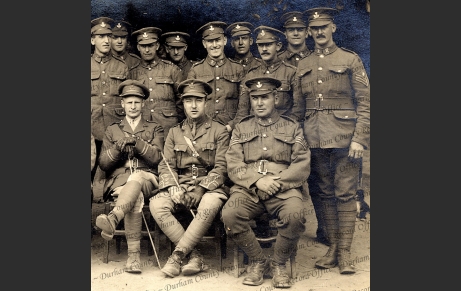 By the end of the war in November 1918, the DLI had grown to 43 battalions, as new Reserve, Service, Territorial, Young Soldier, and other battalions were formed. Of these 43 battalions, 22 served in war zones from the Western Front to the North West Frontier of India.
——————–
On 6 August 1915, the County Durham Recruiting Committee was asked by the War Office to raise a battalion of pioneers – soldiers who would be trained to dig as well as fight. Recruiting for the 3rd County Battalion, the 22nd Battalion DLI, began on 1 October and within days the first recruits were arriving in West Hartlepool, where the battalion would initially be based.

Gone, however, was the enthusiasm of a year earlier, when men had queued to enlist. Recruiting had slowed down and the Derby Scheme, an initiative intended to control the supply of recruits, actually slowed down recruiting even more. This new battalion needed 1,350 men, but that total was only reached by transferring men from the DLI’s reserve battalions.

The 22nd Battalion was first commanded by Lieutenant Colonel William Thomlinson but, after the battalion had been officially handed over to the War Office on 9 March 1916, command was given to Lieutenant Colonel Cecil Morgan from the West India Regiment.

On 22 March 1916, 22 DLI moved to Scotton Camp, Catterick. Then, after intensive training, the battalion left for France on 16 June, just two weeks before the Battle of the Somme began. On 2 July, the Durham Pioneers, distinguished by the crossed rifle and pick collar badges they wore, joined the 8th Division. Immediately they went to work carrying supplies forwards and wounded soldiers back. Near La Boisselle, a group of Durham Pioneers set up a supply dump in a captured trench, during this work 5 men were wounded. These men were the battalion’s first casualties. The 22nd Battalion returned to the Somme battlefield in late October and lost over 30 men digging communication trenches and carrying wounded for the 8th Division.

On 31 July 1917, the Third Battle of Ypres began but 22 DLI had already been hard at work all summer digging new communication trenches and laying a new light railway track in preparation for the battle. This work, which cost of almost 100 casualties, including many injured by mustard gas, prompted Wilfrid Miles, author of the history of the DLI’s Service Battalions, to write: ‘No troops contributed more than the Pioneers to the hard-won successes in Flanders during the summer and autumn of 1917’ (page 199). Once the battle began, the Durham Pioneers dug and carried and suffered in the rain, mud and shell fire of Passchendaele.

On 21 March 1918, the German Army attacked on the Somme. The 8th Division moved forwards to the front, but was soon forced to retreat and the Durham Pioneers were needed to fight as infantrymen. During this fighting, the commanding officer, Colonel Cecil Morgan, who had brought the battalion out to France in 1916, was mortally wounded. When 22 DLI was finally relieved by French soldiers on 2 April, the Pioneers had lost almost 500 men killed, wounded or missing.

In May, the 8th Division was moved to a ‘quiet’ part of the front south of the River Aisne. When the Germans attacked on 27 May, the 22nd Battalion once again fought as infantrymen, with one company being completely destroyed. But this time 22 DLI would not be rebuilt, there would be no more drafts, instead in early July the remnants of the battalion were absorbed by the 1st/7th (Pioneers) Battalion DLI and the 22nd Battalion DLI ceased to exist.