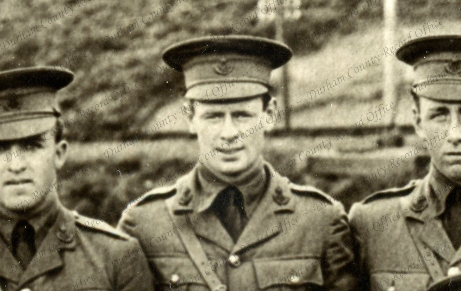 William Hall Coulson was born in 1886, to Major Francis Coulson and his wife Ann. Francis had served with the Durham Rifle Volunteers, resigning his commission in 1902 retaining the rank of major. William followed in his father’s footsteps both into the mining industry, and the volunteer army. In 1907, he was commissioned as Second Lieutenant to the 4th Volunteer Battalion, Durham Light Infantry, which became the 8th Battalion (Territorial Force) in 1908. In May 1914, William was promoted to captain.

Before the war, in 1913, William had married Amy Constance Denholm. When war was declared, Captain Coulson was at the annual camp in Conway, Wales, with 8th Battalion. They were recalled to the north east and undertook training and preparations before leaving for France in April 1915. On 20 April, the battalion arrived at Boulogne and headed straight for Cassel. By 24 April, they were on the road to Ypres, along with the other Durham Light Infantry territorial battalions, to take part in what became known as the Second Battle of Ypres. A long period of fighting took place over 26 and 27 April, during which William Coulson was taken prisoner of war. His own account of what happened appears in the battalion history by Major EH Veitch:
‘I found myself near the cart road and had not got very far down when my right arm dropped to my side useless. I did not feel much pain at the time but just a numbness. I ran for a considerable distance. Men were falling on all sides of me somehow I fell and could not get up again…We all had the impression that the Germans were killing everyone and taking no prisoners, so I did not feel in a very happy position. I was lying in a very open spot. The Germans passed the place where I was lying…I suppose it would be about 7pm when I was hit…Germans kept passing me, and one or two were very good and offered me a drink of cold coffee from their water bottles…I began to feel very weak and discovered I had a wound in the back and was bleeding heavily…I had great difficulty in breathing and realized my lungs were hit. I became very stiff and cold and could hardly move. One German raised his rifle and aimed at me, but another stopped him. They of course took my revolver away and went through my pockets. Two German Red Cross men came…and tried to get me to walk. I only got a few yards when I dropped again, this time on the cart road. They stayed a short while, but then a lot of bullets came very close and they cleared off, leaving me there…I never thought I should see daylight, and one moment hoped for a bullet to finish me off and the next hoped they would miss me. Daylight came at last, but there was a thick fog…The fog gradually lifted and the sun came out. Some [German] Red Cross men at last found me and they, supporting me, led me back over the ground we retired across the night before.’

Initially, Captain Coulson was reported dead in the Durham Advertiser on 7 May 1915. In fact, he was sent to Germany, where he spent most of the rest of the war at officers’ camp at Crefeld and Strohen.

In a letter to her parents on 6 February 1917, Constance Kirkup gives news she has heard about ‘Willie Coulson’. At this time, she is visiting her fiancé, Lieutenant Angus Leybourne, who was one of the first British prisoners to be transferred from a German prisoner of war camp to Switzerland due to ill health. This transfer involved being held at Constance, on the Swiss-German border, and the prisoner’s condition being assessed. She had been talking to a Captain Colley who ‘was in Germany with Willie Coulson, he said it was a terrible disappointment to WC when he didn’t pass, I think he was kept a month at Constance before being told he had to return to Germany.’ Connie’s brother Philip, Angus, and William Coulson were all officers together in 8th Battalion.

Interviews conducted by the War Office with repatriated, escaped, or interned prisoners of war are held at The National Archives. Two, Captain GB Somerville of the Royal Warwickshire Regiment, and Major AE Haig of the King’s Own Scottish Borderers, both use Captain Coulson as an example of prisoners being given excessive punishments for minor incidents. Major Haig states that on 1 September 1917, Captain Coulson had an ‘altercation with a Feldwebel’ [German non-commissioned officer]. Captain Somerville described it as such: ‘[He] happened to be standing in the passage without his coat; an unteroffizier who was passing mistook him for an orderly, and shoved against him. Captain Coulson, resenting this familiarity, shoved him away; the unteroffizier reported him, Captain Coulson’s explanation was not accepted.’ Both officers recount how Coulson was kept in a cell without trial. Somerville escaped on 6 November, but Haig reports that Coulson was eventually tried by court martial on 14 November, but not sentenced until 8 December. This was one month’s detainment, despite having already spent over three months in a cell. He was eventually released on 7 January 1918.

In the Durham Advertiser of 7 June 1918, it is reported that Major Francis Coulson has received news that his son has arrived in Holland. At that time, a number of long term prisoners were moved from Germany to internment camps in Holland. It seems that this was a step towards William’s repatriation, the same paper reports on 1 November that he had arrived home the previous week. His father died shortly after, in December 1918.

William Coulson remained with the 8th Battalion after the war, being promoted to major at the end of July 1920. He resigned his commission I December 1920, retaining the rank of major.

In June 1921, William Coulson had a daughter with Elsie M Tatham (or Little, see family). His wife, Amy, was awarded a decree nisi in November 1921 because of ‘the legal desertion and misconduct of her husband…’ In 1922, William married Elsie, and they appear together on the 1939 register, along with their daughter, living in Newcastle.