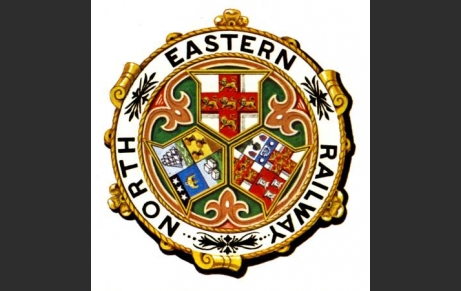 North Eastern Railway emblem With thanks to Rob Langham

Railway company transported goods and men for the war effort

As well as passenger services, coal traffic was heavy on the system, especially from the Durham and Northumberland coalfields. From the mines, the coal would usually be hauled to the docks on the east coast from where it was transported by ship. The coal and mineral traffic on the North Eastern Railway was larger than on any other railway in the United Kingdom.

When war broke out, the railway had had its most successful year in 1913, and 1914 was also looking to match or top the previous year’s success. The war was to bring great change – 18,339 men were released for service with the armed forces, 34% of the staff, and of those 2,236 were to die on active service. This left a huge gap in the workforce, partly filled by women. Industry in the north east was to go under huge expansion which meant increased traffic both supplying the raw materials to the factories and then delivering the finished products: forty-eight factories were enlarged and thirteen new ones built, four shipbuilding yards were enlarged and a further seven started, and three new quarries were also opened. However, there was also a large reduction in traffic to the ports on the North Eastern Railway’s system, especially those owned by the railway, owing to German submarine warfare in the North Sea. This meant that the traffic had to be sent by rail instead for the entire journey, rather than a short journey to the docks. Coal traffic for the Royal Navy, for example, now went from South Wales through to Scotland for onward delivery to the base at Scapa Flow via the entire North Eastern Railway system, nearly two million tons of coal being carried in total until 31st December 1918 for the Admiralty.

Troop trains became a common sight, especially with large military camps set up at Catterick and Ripon. In total, until 31st December 1918, nearly twelve million servicemen boarded trains on the North Eastern Railway, 24,172 special trains being run, 83,579,480 horses were carried, 9,480 vehicles, and in total 5,524,989 tons of goods traffic was carried on behalf of the Government. These figures only include traffic that either originated or terminated on the North Eastern Railway system and does not include traffic that travelled on the system but started and terminated elsewhere.

As well as men, horses and dogs of the North Eastern Railway also served in the armed forces – as did various equipment of the railway: locomotives, motor vehicles, wagons and the rails themselves. The railway came under attack from the Germans by both sea and air and manufactured large quantities of military equipment including artillery shells (as well as running a new munitions factory built on North Eastern Railway land). The North Eastern Railway was the only British railway to have its own Battalion: the 17th Battalion Northumberland Fusiliers, and the reserve 32nd Battalion, were formed entirely of North Eastern Railway men. Originally an infantry Battalion, their role changed to that of a Pioneer Battalion before they went to the front, and later in the war were heavily engaged on railway work for which they were, of course, well suited.

The North Eastern Railway in the First World War

Recruits needed for the 'NER pioneers'