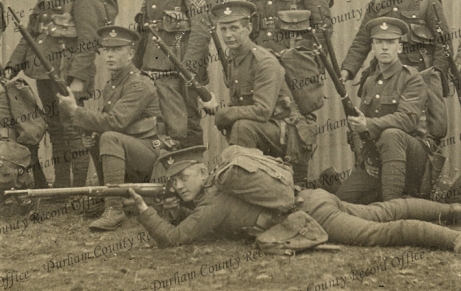 By the end of the war in November 1918, the DLI had grown to 43 battalions, as new Reserve, Service, Territorial, Young Soldier, and other battalions were formed. Of these 43 battalions, 22 served in war zones from the Western Front to the North West Frontier of India.
——————–
In late September and early October 1914, 2,000 recruits travelled by train from Newcastle to Buckinghamshire. At Aylesbury, half were formed into the 14th (Service) Battalion DLI, whilst the other half assembled at Halton Park, near Aylesbury, as the 15th (Service) Battalion DLI.

On 3 October, 14 DLI moved to join 15 DLI at the tented camp on Halton Park, with both then forming part of the 64th Brigade of the 21st Division. There bad weather, no khaki uniforms, dummy rifles, and too few officers kept training to little more than basic drill. However, in early December, both battalions moved to billets in High Wycombe and there training began in earnest and khaki uniforms and rifles were issued.

In early April 1915, 14 and 15 DLI marched back to a newly built camp of wooden huts on Halton Park. Training then intensified as the battalions prepared for service overseas, before a final move in July to Witley Camp, near Aldershot.

On 11 September 1915, both 14 and 15 DLI landed at Boulogne as part of the 21st Division. Two weeks later both inexperienced and unprepared battalions were sent into battle at Loos, in the first major British offensive on the Western Front. After a long march, wet, tired and hungry, the battalions moved forwards across the old British front line, reaching the old German front about 2am on 26 September. Both battalions attacked later that morning only to be driven back by machine gun fire. In the fighting, 14 DLI lost almost 300 men killed or wounded, whilst 15 DLI lost over 450 men. Amongst the dead were the two commanding officers.

After a winter in the trenches at Armentieres, 15 DLI was moved to south to prepare for the opening of the Battle of the Somme.

About 7.30am on 1 July 1916, 15 DLI attacked the German front line north of Fricourt. By early afternoon, the battalion had advanced to Shelter Wood, taking 200 German prisoners for the loss of 450 men killed or wounded, including the commanding officer mortally wounded. Then, after another short spell on the Somme in September, 15 DLI returned to the dangerous routines of trench warfare.

On 9 April 1917, 15 DLI was in action on the opening day of the Battle of Arras but uncut barbed wire, machine gun fire and resulting heavy losses, limited the advance to capturing the German front line. The battalion returned to the battle at the end of April, and on 6 May was holding part of the Hindenburg Line. The fighting had died down but snipers and machine gunners remained active. Then a stretcher bearer, Michael Heaviside, took water to a badly wounded man lying in no man’s land. For his bravery, Private Heaviside was awarded the Victoria Cross.

Fighting in October 1917, during the Third Battle of Ypres, saw a third commanding officer killed, before the battalion settled down to another miserable winter in the trenches. During February 1918, a draft of officers and 100 men arrived from the recently disbanded 10 DLI.

On 21 March 1918, when the German Army attacked on the Somme, the 21st Division was in reserve. Rushed forwards to the front, 15 DLI counter attacked, only to be driven back. In four days of fighting, 15 DLI lost almost 500 men killed, wounded or missing, including the commanding officer killed in action. Further fighting in April caused yet more casualties.

In late April, the 21st Division was sent to recover near Rheims, but on 27 May it once more faced a massive German attack and was forced to retreat. In two days of fighting, 15 DLI lost over 450 men killed, wounded or missing.

Drafts of conscripts arrived during the summer of 1918, as 15 DLI rebuilt and retrained, and in late August the battalion joined the British advance across the old Somme battlefield that pushed the German Army back towards Maubeuge. This fighting, however, cost the life of yet another commanding officer and Captain Lascelles VC, late of 14 DLI, who died in the battalion’s last fight of the war on 7 November 1918.