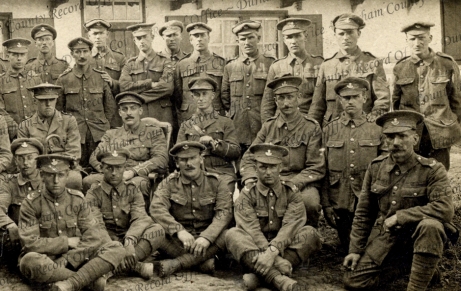 By the end of the war in November 1918, the DLI had grown to 43 battalions, as new Reserve, Service, Territorial, Young Soldier, and other battalions were formed. Of these 43 battalions, 22 served in war zones from the Western Front to the North West Frontier of India.
——————–
In late September and early October 1914, 2,000 recruits travelled by train from Newcastle to Buckinghamshire. At Aylesbury, half were formed into the 14th (Service) Battalion DLI, whilst the other half assembled at Halton Park, near Aylesbury, as the 15th (Service) Battalion DLI.

On 3 October, 14 DLI moved to join 15 DLI at the tented camp on Halton Park, with both then forming part of the 64th Brigade of the 21st Division. There bad weather, no khaki uniforms, dummy rifles, and too few officers kept training to little more than basic drill. However, in early December, both battalions moved to billets in High Wycombe and there training began in earnest and khaki uniforms and rifles were issued. In early April 1915, 14 and 15 DLI marched back to a newly built camp of wooden huts on Halton Park. Training then intensified as the battalions prepared for service overseas, before a final move in July to Witley Camp, near Aldershot.

On 11 September 1915, both 14 and 15 DLI landed at Boulogne as part of the 21st Division. Two weeks later both inexperienced and unprepared battalions were sent into battle at Loos, in the first major British offensive on the Western Front. After a long march, wet, tired and hungry, the battalions moved forwards across the old British front line, reaching the old German front about 2am on 26 September. Both battalions attacked later that morning only to be driven back by machine gun fire to the old German front line. In the fighting, 14 DLI lost almost 300 men killed or wounded, whilst 15 DLI lost over 450 men. Amongst the dead were the two commanding officers, 14 DLI’s Archibald Hamilton and 15 DLI’s Edward Logan.

At the end of November 1915, 14 DLI joined the 6th Division, of which 2 DLI was part. Then in early August 1916, after a miserable winter spent at Ypres, 14 DLI moved south with the 6th Division to join the fighting on the Somme, but was not heavily involved. A second miserable winter in the trenches followed, before 14 DLI joined an attack in April 1917 in the Lens coalfield. There, after successfully capturing Nash Alley, the battalion was forced to retreat, having suffered 250 casualties.

On 20 November 1917, after months of trench warfare and training, 14 DLI, as part of the 6th Division, joined the British tank advance at Cambrai, taking prisoners and capturing German guns. A German counter-attack, however, forced the Durhams back with heavy losses. In the desperate fighting around a canal east of Marcoing on 3 December, Captain Arthur Lascelles was wounded, taken prisoner and escaped. He was later awarded the Victoria Cross.

In February 1918, with manpower shortages looming, the British Army on the Western Front was reorganised. Each division was to lose three battalions and the 14th Battalion DLI was one of the battalions chosen for disbanding. The 43 officers and 839 men of 14 DLI were sent to other battalions desperate for reinforcements.

Thank you for your addition to this story.

Unfair on the 14th Battalion to claim "14 DLI moved south with the 6th Division to join the fighting on the Somme, but was not heavily involved", when on September 19th 1916 they were instrumental in the capture of a series of German trenches known as the Quadrilateral.
During this attack they captured 106 prisoners and 6 machine guns at a cost of 3 officers killed along with 31 other ranks, 5 officers wounded, 161 other ranks wounded and 32 other ranks missing.
Indeed by the end of October 1916 following an attack on Rainbow and Shine Trenches the battalion was reduced to just 200 men in totality, having lost 182 other ranks killed, and 7 officers missing or wounded.