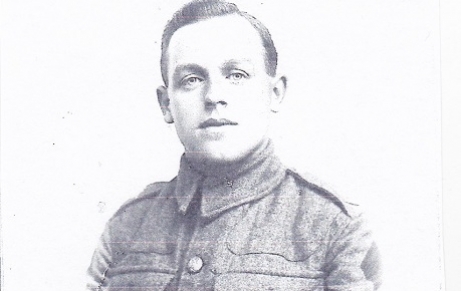 Photograph of Thomas Marshall Iley With many thanks to Paul Colbourne, from his family collection

From Wolsingham, served with 15th Battalion DLI, killed in action 1918

Thomas Marshall Iley was killed on 6 October 1918. The following is a transcript from the battalion war diary for that day. Abbreviations and explanations have been added in square brackets:

Montecouvez Farm 6 October
At 0300 Bn HQ [Battalion headquarters] moved off to S 5 b 9 3. At 0500 the Bn attacked without Artillery support. The Bn came under very heavy MG [machine gun] fire and eventually established a line on the road running SE [southeast] from MONTECOUVEX [actually Montecouvez] FARM to T 1 b. During the day a footing was gained in the BEAUREVOIR LINE at T 1 b 5 2 and 100 yards of the Trench was manned. Possession was also obtained of the trench running from the Road to MORTHO WOOD. The Bn came under very heavy Trench Mortar and Machine Gun fire in this position. Communication was obtained with the 1st EAST YORKS on the lest and the 38th Divn [division] on the right. By night the Bn re-organised and the line was re-arranged.

Research compiled about Thomas Marshall Iley can be found in the display at Brandon British Legion:
http://counties.britishlegion.org.uk/counties/northumbria-county/branches/brandon-meadowfield