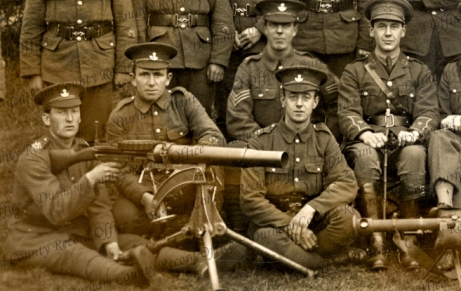 By the end of the war in November 1918, the DLI had grown to 43 battalions, as new Reserve, Service, Territorial, Young Soldier, and other battalions were formed. Of these 43 battalions, 22 served in war zones from the Western Front to the North West Frontier of India.
——————-
The 16th Battalion DLI was formed in Durham in October 1914, as part of Kitchener’s New Army, with volunteers from the 3rd Battalion DLI, after this Reserve battalion had been moved from the DLI’s Depot in Newcastle to reinforce the North East’s coastal defences. A first draft of 485 men from 3 DLI was soon joined by other drafts of recruits from the Depot.

Training began under the command of 50-year-old Lieutenant Colonel Edmund Grimshawe, late of the 3rd Battalion. But there was also time for sport and, in February 1915, 16 DLI fielded a rugby team in a match with Durham School. The battalion won.

However, unlike the DLI’s other New Army Service battalions, 16 DLI (and 17 DLI which had been raised at Barnard Castle at the same time) was not destined to serve overseas. Instead, in April 1915, 16 DLI became a Reserve battalion and was soon moved first to Darlington, and then, in September, 1915 to Penkridge Bank Camp near Rugeley in Staffordshire. There it remained as a training battalion regularly supplying drafts of soldiers for service overseas.

Whilst at Rugeley, the Reserve companies of the 22nd (Pioneers) Battalion DLI joined 16 DLI. These companies had been destined to form a 24th Battalion, when the Pioneers went on active service overseas, but 24 DLI was never formed.